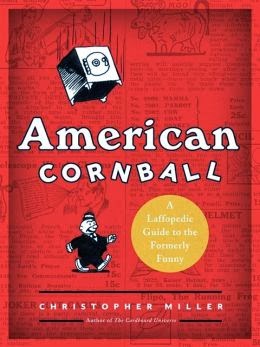 American Cornball is Christopher Miller's irresistibly funny illustrated survey of popular humor—the topics that used to make us laugh, from hiccups and henpecked-husbands to outhouses and old maids—and what it tells us about our country yesterday and today.


Miller revisits nearly 200 comic staples that have been passed down through our culture for generations, many originating from the vaudeville age. He explores the (often unseemly) contexts from which they arose, why they were funny in their time, and why they eventually lost their appeal. The result is a kind of taxonomy of humor during America's golden age that provides a deeper, more profound look at the prejudices, preoccupations, and peculiarities of a nation polarized between urban and rural, black and white, highborn and lowbrow.


As he touches on issues of racism and sexism, cultural stereotypes and violence, Miller reveals how dramatically our moral sensibilities have shifted, most notably in the last few decades. Complete with more than 100 period illustrations, American Cornball is a richly entertaining survey of our shifting comic universe.


American Cornball: A Laffopedic Guide to the Formerly Funny by Christopher Miller is a very highly recommended. This entertaining and fascinating guide looks at what Americans have found humorous from the start of the 20th century until about 1966.

Arrange in alphabetical order by the subject of the humor this guide offers a startling look back at what we have found funny in the past that may not be so funny today, as well as a nice overview of what topics are found in humor. In American Cornball, Christopher Miller looks at the comic stripes, cartoons, and movies from our past and sifts out the cultural touchstones of humor that were seemingly shared by a majority of people.

It is rather eye opening to read about some of the topics that people found humorous early in the 20th century that we would find appalling today (racism, dead baby jokes, rape jokes, spousal abuse). There are also connections to subjects still found in humor today (bananas, ducks, baldness, back seat drivers, spinach). There are things that used to be funny but have lost their humorous context over time (boarding houses, chamber pots, tax payer's/pauper’s barrel, old maids).

Miller provides so many great little tidbits of information. For example, I never would have thought that the early and mid-1960s seems to have been the heyday of funny amnesia. Or that cartoonists have always been kinder to dogs, but they clearly find cats funnier. Did you know that feet are even funnier than noses? Or that all personal-hygiene items are funny—mouthwash, toothpaste, toilet paper, and so on—but soap may be the funniest. Even I can understand that the bigger the musical instrument, the more laughter it provokes.

Who would have imagined that "mooning” peaked in 1955? Or that the laugh track debuted on the evening of September 9, 1950, on a television comedy called The Hank McCune Show?  And number 23 is the funniest number, but the number 42, with hats off to Douglas Adams, comes in a close second to 23 as the favorite funny number.

Did you know that grawlixes are the name for symbols that stand for unprintable profanities:“!#@!” Or that an "eusystolism" is a euphemistic use of initials for words we’d prefer not to utter or spell out - "B.O.," "B.M.,” “V.D.,” and “W.C.” Or that those little drops of sweat that fly off a cartoon character when he or she is alarmed or dismayed are called "plewds."

This is an informative and entertaining guide as well as a history and linguistic lesson on humor.


Disclosure: My Kindle edition was courtesy of HarperCollins via Edelweiss for review purposes. (read in Febuary 2014)