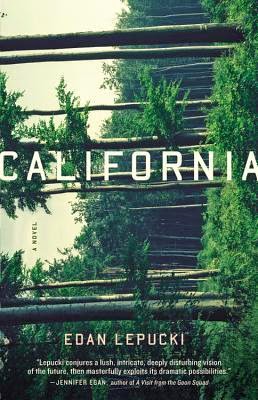 The world Cal and Frida have always known is gone, and they've left the crumbling city of Los Angeles far behind them. They now live in a shack in the wilderness, working side-by-side to make their days tolerable in the face of hardship and isolation. Mourning a past they can't reclaim, they seek solace in each other. But the tentative existence they've built for themselves is thrown into doubt when Frida finds out she's pregnant.
Terrified of the unknown and unsure of their ability to raise a child alone, Cal and Frida set out for the nearest settlement, a guarded and paranoid community with dark secrets. These people can offer them security, but Cal and Frida soon realize this community poses dangers of its own. In this unfamiliar world, where everything and everyone can be perceived as a threat, the couple must quickly decide whom to trust.
A gripping and provocative debut novel by a stunning new talent, California imagines a frighteningly realistic near future, in which clashes between mankind's dark nature and deep-seated resilience force us to question how far we will go to protect the ones we love.

California by Edan Lepucki is a so-so character study of a relationship that, very coincidentally, takes place in a post-apocalyptic future.
Society has broken down. Apparently Eastern and Southern states have been devastated/wiped out by hurricanes and the Midwest by blizzards. A flu epidemic has further reduced the population. The wealthy live isolated in sort of city/state gated communities where they keep all supplies and medical facilities for themselves.

Cal and Frida have left L.A. behind them and have found a shed in the woods that they are taking over in an attempt to live off the land away from the disintegrating urban areas. Frida has brought along a turkey baster, which she cherishes. They live out in the woods for two years, eventually taking over a cabin when they find their closest neighbors dead. But after Frida discovers she is pregnant, they decide that they need the protection/help that can be found in a larger community, so they seek shelter among the nearby group they have heard about. Once they are there, the two discover that they both have a connection to the groups leader and allowed to stay (Frida brought her turkey baster with her, naturally). The group may have more secrets than it seems at first.

The description of California makes it seem far more compelling than it is in reality. This is more of a character study of Frida and Cal, and their relationship. And lots of pondering of Frida's turkey baster. (I am not kidding. The turkey baster is a character.) As characters, I found Frida annoying and Cal boring. More importantly, I didn't believe for a minute that either one of them would make it anywhere in the wilderness on their own. I kept reading, hoping that there would be a huge twist or some earth-shattering information would be revealed, but.... nothing. The big surprises weren't that surprising.  (I was at least expecting something revolving around that stupid turkey baster. )

And that really signifies the problem with California - it ends up feeling like a grab-bag of ideas with no firm commitment to any one of them. The hurricanes and blizzards, mentioned in passing, both seem like they would be more compelling settings for a drama about societal breakdowns amid natural and man-made disasters rather than these two bumbling about in the woods. This book is simply a way to pass the time, nothing special, which is disappointing because I was looking forward to reading it.

Excerpt - first chapter which includes the introduction to the turkey baster

Disclosure: My Kindle edition was courtesy of Little, Brown and Company for review purposes.