A History of the Future

A History of the Future  by James Howard Kunstler
Grove/Atlantic: 8/5/2014 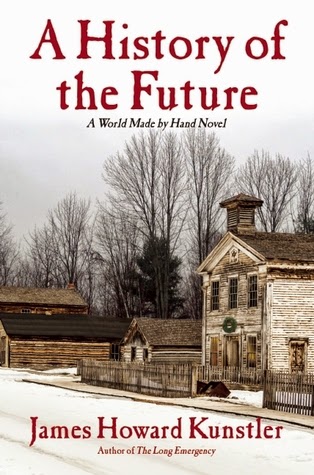 A History of the Future is the third thrilling novel in Kunstler’s "World Made By Hand" series, an exploration of family and morality as played out in the small town of Union Grove.

Following the catastrophes of the twenty-first century—the pandemics, the environmental disaster, the end of oil, the ensuing chaos—people are doing whatever they can to get by and pursuing a simpler and sometimes happier existence. In little Union Grove in upstate New York, the townspeople are preparing for Christmas. Without the consumerist shopping frenzy that dogged the holidays of the previous age, the season has become a time to focus on family and loved ones. It is a stormy Christmas Eve when Robert Earle’s son Daniel arrives back from his two years of sojourning throughout what is left of the United States. He collapses from exhaustion and illness, but as he recovers tells the story of the break-up of the nation into three uneasy independent regions and his journey into the dark heart of the New Foxfire Republic centered in Tennesee and led by the female evangelical despot, Loving Morrow. In the background, Union Grove has been shocked by the Christmas Eve double murder by a young mother, in the throes of illness, of her husband and infant son. Town magistrate Stephen Bullock is in a hanging mood.
A History of the Future is attention-grabbing and provocative, but also lyrical, tender, and comic—a vision of a future of America that is becoming more and more convincing and perhaps even desirable with each passing day.

A History of the Future  by James Howard Kunstler is the highly recommended third book in the World Made by Hand series. These books are set in a future America after a complete economic, political, and cultural collapse has occurred. Epidemics have swept the land and the population has been decimated. In this world, those who are going to survive are forced to live literally by what they can do with their own hands and labor. It is sort of a dystopian pioneer setting - the simple life but in a changed, harsh world.

It is just before Christmas in the town of Union Grove in upstate New York. While there is no electricity, the town is doing what it can to decorate and celebrate a much simpler holiday, but perhaps one with more meaning after the catastrophes of previous years. The New Faith Covenant Brotherhood Church has opened a tavern, a pet project for Brother Jobe, which gives the townspeople a place to fellowship and helps bring a sense of a new normalcy returning to Union Grove. Andrew Pendergast is thriving. He has kept busy, and with his many varied interests, is actually doing quite well in this new world where self-sufficiency is the key.

But then the unthinkable happens - a double murder. It appears that Mandy Stokes, a woman whose sanity is truly in question, has murdered her child and husband on Christmas Eve. She needs to be locked up. The Brotherhood volunteers a place where this is possible and now the town must decide how to proceed. Is there a legal system intact to handle a murder trial? During the same time, Daniel Earle, the son of Mayor Robert Earle who left Union Grove at the end of the first book, World Made By Hand, has returned home. Emaciated, exhausted, and ill, Daniel needs a chance to recover, but even more important is the news he brings of the fractured outside world.

Many of the same concerns I had with World Made By Hand continued with A History of the Future, with the exception of tying up the loose ends of the story. Naturally, if you are writing a series of books set in the same world, certain parts of the story and plot may continue on into the next novel, so that problem was neatly answered.  The female characters continue to feel one dimensional and I still know that people around my part of the country could survive and thrive because they have a wealth of skills and knowledge that the people of Union Grove, NY, are somehow lacking. It is encouraging that the survivors are doing better and learning old/new-to-them skills.

Disclosure: My Kindle edition was courtesy of Grove/Atlantic for review purposes.
Posted by Lori L at 5:00 AM