Don't Look Back by Gregg Hurwitz 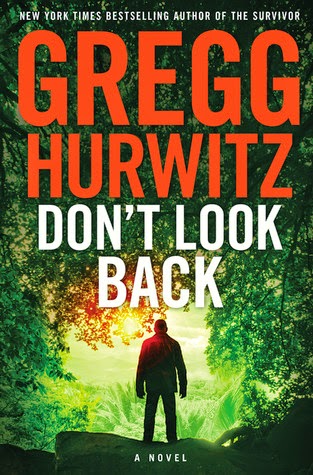 In Don't Look Back, Eve Hardaway, newly single mother of one, is on a trip she’s long dreamed of—a rafting and hiking tour through the jungles and mountains of Oaxaca, in southern Mexico. Eve wanders off the trail, to a house in the distance with a menacing man in the yard beyond it, throwing machetes at a human-shaped target. Disturbed by the sight, Eve moves quickly and quietly back to her group, taking care to avoid being seen. As she creeps along, she finds a broken digital camera, marked with the name Teresa Hamilton. Later that night, in a rarely used tourist cabin, she finds a discarded prescription bottle—also with the name Teresa Hamilton. From the camera’s memory card, Eve discovers Teresa Hamilton took a photo of that same menacing looking man in the woods. Teresa Hamilton has since disappeared.
Now the man in the woods is after whoever was snooping around his house. With a violent past and deadly mission, he will do anything to avoid being discovered.  A major storm wipes out the roads and all communication with the outside world. Now the tour group is trapped in the jungle with a dangerous predator with a secret to protect. With her only resource her determination to live, Eve must fight a dangerous foe and survive against incredible odds—if she's to make it back home alive.

Don't Look Back by Gregg Hurwitz is a highly recommended action/adventure thrill ride of terror.

When Eve Hardaway's husband dumps her for a younger woman and moves to Europe, leaving her and their son behind, she decides to push beyond her comfort zone. Instead of canceling the surprise trip she booked for their anniversary,  Eve decides to go ahead and take the vacation to the  Días Felices Ecolodge, an eco-tourism camp in the mountainous jungles of Oaxaca, Mexico. While out on a day excursion with the group, Eve discovers a camera lost by a woman who was a previous guest, on a ridge overlooking a house where she sees the disturbing sight of a man practicing throwing a machete at a human target. Later, when unpacking in her cabin, she discovers other items left behind by this same woman. When Eve asks about the woman, she is told that she decided to suddenly pack up and leave for Mexico City. With further research, Eve discovers that this woman was reported missing and never found.

As more clues and questions surface, suspicions begin to rise in the group and it becomes abundantly clear that they are likely all in danger from the sinister-looking man with the machete she saw in the jungle. Eve must rely on hidden resources she didn't even realize she had in order to survive this threat and not leave her son without a mother.

With their isolation in the jungle and threatening weather looming, Hurwitz does an excellent job ratcheting up the tension and making the threat to everyone feel more and more palpable and ominous. While careful readers are going to notice a few holes in the plot, most of us will likely just race through trying to read as fast as possible to see what on earth happens next. Hurwitz does an excellent job with the character of Eve. Although action/adventure books are not usually known for a depth of character development,  Eve felt like a real person to me and I was cheering her on.

This is a perfect airplane book. It will keep you entertained and the time will pass quickly.


Disclosure: My Kindle edition was courtesy of St. Martin's Press via Netgalley for review purposes.