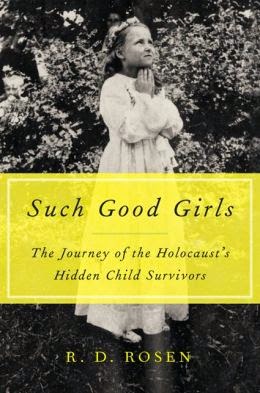 They defied death by being such good girls—keeping secrets, staying out of sight, and suffering in frightened silence.
Sophie—pictured on the cover—survived the Holocaust without even knowing she was Jewish, while her terrified, widowed mother worked for the Nazis in Poland under the guise of a Christian bookkeeper.
Flora, orphaned by Final Solution, was shuttled through southern France, from convents to the homes of one Christian family after another, unsure of who she really was.
Carla and her family took shelter in the apartment of a Dutch barber, while, one floor below, the man who protected them would cut German soldiers' hair.
Sophie Turner-Zaretsky, Flora Hogman, and Carla Lessing (and her husband, Ed) survived not only the Holocaust—among the mere 10 percent of European Jewish children who did—but their own survival. Each of them ended up in New York, where they slowly emerged from the traumas of their childhoods, devoted their careers to helping others, and played important roles in the groundbreaking 1991 event that, for the first time, brought together the hidden child survivors scattered around the world.
A chance meeting with Sophie sent author R. D. Rosen, a privileged Jewish American child of the suburbs, on a journey to grasp the scope of Nazi extermination of Europe's Jews and to honor hidden children, the very last generation of survivors to have witnessed the Holocaust firsthand.

Such Good Girls: The Journey of the Holocaust's Hidden Child Survivors by R. D. Rosen is a very highly recommended nonfiction account of several hidden child survivors of the holocaust.

Most people know of Anne Frank, a child hidden for most of WWII who did not survive, but there were other Jewish children who were hidden and survived the Holocaust. In Such Good Girls  R. D. Rosen shares the stories of three woman who survived the holocaust by hiding and how it affected their lives. The book is divided into two parts. The first tells the individual stories of the three girls, one Polish, one French, and one Dutch, and what they had to do and endure in order to survive. The second half of the book explores the lingering effects their childhood trauma has had on them as adults.  The Hidden Child Survivors have been meeting since the 1980s and sharing their stories to add to the Shoah Foundation and the U.S. Holocaust Memorial Museum.

The numerous name changes, constant relocation and moving, the loss of family, heritage and personal identity are all heart breaking. The children may have survived the war, but at a great cost. This is not an exhausting, scholarly account of all the stories, but a selection of three that should highlight the fact that others also endured and were traumatized. Sharing and allowing these stories to reach a wider audience will shed light on a group of survivors that have been neglected in the past.

While this is not an emotionally easy book to read, the information it contains is necessary for us to always keep in mind that this must never happen again, although I know that it is, to other groups of people throughout the world. The book includes 16 pages of pictures, a bibliography, and list of documentaries and films.

Disclosure: My Kindle edition was courtesy of  HarperCollins for review purposes.
Posted by Lori L at 5:00 AM