The Secret Place by Tana French 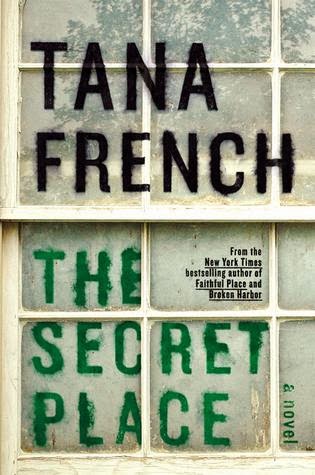 The photo on the card shows a boy who was found murdered, a year ago, on the grounds of a girls’ boarding school in the leafy suburbs of Dublin. The caption saysI KNOW WHO KILLED HIM.

Detective Stephen Moran has been waiting for his chance to get a foot in the door of Dublin’s Murder Squad—and one morning, sixteen-year-old Holly Mackey brings him this photo. “The Secret Place,” a board where the girls at St. Kilda’s School can pin up their secrets anonymously, is normally a mishmash of gossip and covert cruelty, but today someone has used it to reignite the stalled investigation into the murder of handsome, popular Chris Harper. Stephen joins forces with the abrasive Detective Antoinette Conway to find out who and why.
But everything they discover leads them back to Holly’s close-knit group of friends and their fierce enemies, a rival clique—and to the tangled web of relationships that bound all the girls to Chris Harper. Every step in their direction turns up the pressure. Antoinette Conway is already suspicious of Stephen’s links to the Mackey family. St. Kilda’s will go a long way to keep murder outside their walls. Holly’s father, Detective Frank Mackey, is circling, ready to pounce if any of the new evidence points toward his daughter. And the private underworld of teenage girls can be more mysterious and more dangerous than either of the detectives imagined.
The Secret Place is a powerful, haunting exploration of friendship and loyalty, and a gripping addition to the Dublin Murder Squad series.

Over a year ago a young man was found murdered on the grounds of an exclusive private girls school. The crime was never solved so when a girl from the school, Holly Mackey, brings a postcard that has a picture of the murdered young man, Chris Harper, on it with letters cut out saying "I know who killed him," Detective Stephen Moran realizes this may be his opportunity to get onto the Dublin police department's homicide squad. Stephan takes the information to detective Antoinette Conway on the homicide squad and the two head out together to interview girls at the school.

Soon it becomes clear that there are no easy answers. Their investigation, which takes place over the course of one day, clearly shows that there are two groups of girls who could be involved, Holly's friends and another group of popular girls. As Moran and Conway interview the girls and try to untangle all the lies and deception surrounding the case, the main suspect seems to change and perceptions shift with every chapter.

French is an incredible writer who manages some of the best character development while still creating an atmosphere of tension and suspicion. I love how the shifting information provides clues that continually pointing to a different suspect. I love mysteries where I can't guess who did it until the end. Bravo on that point - I was guessing right to the end. And oohhh, doggies, more on teenage girls in a minute...

This is a 5th in the series book, but you can enjoy it without following the series. I have read a couple earlier books, but not all of them. The Secret Place is a stand-alone novel that just happens to be in a series. I have a feeling if you have never read French, after reading The Secret Place you'll want to give her previous novels a try. It's a long novel, but the action takes place in one day. The chapters alternate between the present day with the investigation and interviews with the girls, and in the past, showing the lives of the girls before Chris was killed. The pre-murder chapters tell you how much longer Chris has to live and then you have a slice of life and what was happening, information that should give you clues about all the suspects.

Now, teenage girls... Those of you in the know probably also realize that all teenagers can be dangerous. (Teenage boys also have this capacity, but in a different way from the girls.) Girls can be devious and clever. They can play off each other making up rumors and lies in an attempt to finagle a relationship with whatever guy they like. Some of them can play the guys like a fiddle. Add social media and texting to the mix and it is explosive. Some of these same girls grow up to be women who still do the same thing while trying to exert their will on others as adults. French captures this capacity to perfection in The Secret Place.


There was one little glitch in my enjoyment, which was the insertion of some supernatural powers. When it happened I said aloud, "Don't go there - you don't need to" but, alas, it was already there. In the end, however, it added nothing to the book, perhaps a red herring, but one that I didn't think was necessary and found distracting.


Disclosure: My Kindle edition was courtesy of Viking Adult for review purposes.