At the Water's Edge


At the Water's Edge by Sara Gruen 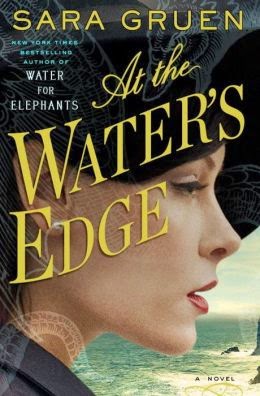 At the Water’s Edge is a gripping and poignant love story about a privileged young woman’s awakening as she experiences the devastation of World War II in a tiny village in the Scottish Highlands.
After disgracing themselves at a high society New Year’s Eve party in Philadelphia in 1944, Madeline Hyde and her husband, Ellis, are cut off financially by his father, a former army colonel who is already ashamed of his son’s inability to serve in the war. When Ellis and his best friend, Hank, decide that the only way to regain the Colonel’s favor is to succeed where the Colonel very publicly failed - by hunting down the famous Loch Ness monster - Maddie reluctantly follows them across the Atlantic, leaving her sheltered world behind.
The trio find themselves in a remote village in the Scottish Highlands, where the locals have nothing but contempt for the privileged interlopers. Maddie is left on her own at the isolated inn, where food is rationed, fuel is scarce, and a knock from the postman can bring tragic news. Yet she finds herself falling in love with the stark beauty and subtle magic of the Scottish countryside. Gradually she comes to know the villagers, and the friendships she forms with two young women open her up to a larger world than she knew existed. Maddie begins to see that nothing is as it first appears: the values she holds dear prove unsustainable, and monsters lurk where they are least expected.
As she embraces a fuller sense of who she might be, Maddie becomes aware not only of the dark forces around her, but of life’s beauty and surprising possibilities.

At the Water's Edge by Sara Gruen is a very highly recommended period piece set during WWII.

Maddie Hyde, her husband, Ellis, and their friend, Hank, are part of Philadelphia society. After a drunken New Year's Eve party that results in some disastrous familial/financial repercussions for Maddie and Ellis, the trio decides to go to Scotland and prove the Loch Ness monster really exists. This is something Ellis's father attempted to do years before and his photos were later discredited. The fact that Ellis is color blind and Hank has flat feet, which prevented the two from enlisting, also plays into their decision. They are tired of the insinuations being thrown toward them. Despite the fact that it is during the war and U-boats are patrolling the very area of the Atlantic that they will cross, the trio finds transportation and manages to make their way to the village of Drumnadrochit, Scotland, and a small, quaint inn.

Maddie has a hard time with motion sickness while crossing the Atlantic and it is during the crossing that the effects of war also becomes very real to her. Then, once in Scotland, Maddie seems to completely sober up and take a good look at herself, as well as Ellis and Hank, who are insensitive, privileged, inebriated morons, and she realizes that she is associated with them and their entitled, gauche, drunken search for Nessie. Maddie begins to grow as a person and connect with the people in the village while Ellis and Hank become less civilized and more self-obsessed caricatures. But, due to the times, Maddie is also subjugated to Ellis, which creates a difficult dilemma.

I really liked At the Water's Edge and was totally engrossed in the story from start to finish. First, Sara Gruen is an excellent writer so she is able to describe imagery and capture the settings so vividly that it seems effortless and allows the story to flow along smoothly. I appreciated the growth and transformation Maddie experiences as she is presented with some hard truths and realizes the true essence of Ellis's character. She matures while Ellis and Hank are diminished. Including the local myths and signs as harbingers of what could happen provides nice foreshadowing. The totality added up to a great historical fiction novel. I could have done without the love story, but, obviously, it certainly didn't detract from my enjoyment.


Disclosure: My Kindle edition was courtesy of Spiegel & Grau at Random House for review purposes.