Dead Wake: The Last Crossing of the Lusitania by Erik Larson 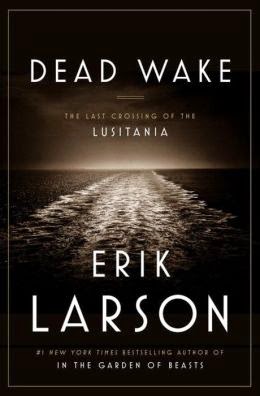 On May 1, 1915, with WWI entering its tenth month, a luxury ocean liner as richly appointed as an English country house sailed out of New York, bound for Liverpool, carrying a record number of children and infants. The passengers were surprisingly at ease, even though Germany had declared the seas around Britain to be a war zone. For months, German U-boats had brought terror to the North Atlantic. But the Lusitania was one of the era’s great transatlantic “Greyhounds”—the fastest liner then in service—and her captain, William Thomas Turner, placed tremendous faith in the gentlemanly strictures of warfare that for a century had kept civilian ships safe from attack.
Germany, however, was determined to change the rules of the game, and Walther Schwieger, the captain of Unterseeboot-20, was happy to oblige. Meanwhile, an ultra-secret British intelligence unit tracked Schwieger’s U-boat, but told no one. As U-20 and the Lusitania made their way toward Liverpool, an array of forces both grand and achingly small—hubris, a chance fog, a closely guarded secret, and more—all converged to produce one of the great disasters of history.
It is a story that many of us think we know but don’t, and Erik Larson tells it thrillingly, switching between hunter and hunted while painting a larger portrait of America at the height of the Progressive Era. Full of glamour and suspense, Dead Wake brings to life a cast of evocative characters, from famed Boston bookseller Charles Lauriat to pioneering female architect Theodate Pope to President Woodrow Wilson, a man lost to grief, dreading the widening war but also captivated by the prospect of new love.
Gripping and important, Dead Wake captures the sheer drama and emotional power of a disaster whose intimate details and true meaning have long been obscured by history.

Dead Wake: The Last Crossing of the Lusitania by Erik Larson is very highly recommended. It is a perfect integration of thorough research and an impeccable presentation which results in a definitive account of the tragedy that manages to present the facts and the personal stories. Most of us probably think we know the story of the sinking of the Lusitania: it was sunk by a German U-boat off the coast of Ireland on May 7, 1915, and propelled the USA into WWI. While those may be facts, as Larson proves, there is much more to the story. Larson's narrative follows the Lusitania, the news of the war, what the intelligence community knew, the U-boats, and the personal stories of passengers, captains, and President Wilson.

Larson writes: "I always had the impression, shared I suspect by many, that the sinking immediately drove President Woodrow Wilson to declare war on Germany, when in fact America did not enter World War I for another two years—half the span of the entire war. But that was just one of the many aspects of the episode that took me by surprise. As I began reading into the subject, and digging into archives in America and Britain, I found myself intrigued, charmed, and moved. In short, I was hooked. What especially drew me was the rich array of materials available to help tell the story in as vivid a manner as possible—such archival treasures as telegrams, intercepted wireless messages, survivor depositions, secret intelligence ledgers, Kapitänleutnant Schwieger’s actual war log, Edith Galt’s love letters, and even a film of the Lusitania’s final departure from New York. Together these made a palette of the richest colors. I can only hope I used them to best effect."

The cast of historical figures makes Larson's account the substantial, vivid account he was hoping for. The Lusitania was the star of the Cunard fleet and William Thomas Turner was the experienced captain. Captain Walther Schwieger commanded the U-20 who torpedoes the Lusitania. Larsen follows the maneuvers and travels of both the Lusitania and U-20, including a plethora of background information. President Wilson's infatuation with courting Edith Galt provided a distraction that took his attention away from current events. British spymaster Blinker Hall decoded German messages and followed the movements and actions of U-20. Adding to these people is the information on many of the passengers included by Larsen, including Boston bookseller Charles Lauriat, trailblazing architect Theodate Pope, and suffragette Margaret Mackworth.

The attack resulted in the loss of 1,195 passengers and crew. "Of the 791 passengers designated by Cunard as missing, only 173 bodies, or about 22 percent, were eventually recovered, leaving 618 souls unaccounted for. The percentage for the crew was even more dismal, owing no doubt to the many deaths in the luggage room when the torpedo exploded. Of 404 missing crew, only 50 bodies were recovered."

This is much more than a dry presentation of historical facts and research. Larson presents all the historical facts in a very accessible manner that makes the history come alive and explains what really happened to the Lusitania. "In the end, Schwieger’s attack on the Lusitania succeeded because of a chance confluence of forces. Even the tiniest alteration in a single vector could have saved the ship." Larsen's gripping presentation proves his point. In the end, reading this tale of a historical tragedy is just as compelling as any novel. Included is an Epilogue, Personal Effects, Sources and Acknowledgements, Notes, and Bibliography.

Erik Larsen is one of a few authors I know I will automatically buy and read any book they write and Dead Wake underscores why that is true. Bravo, Mr. Larson!


Disclosure: My Kindle edition was courtesy of Crown Publishing for review purposes.
Posted by Lori L at 5:00 AM