The Wilderness of Ruin

The Wilderness of Ruin by Roseanne Montillo 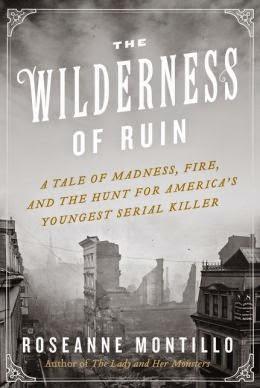 In late nineteenth-century Boston, home to Herman Melville and Oliver Wendell Holmes, a serial killer preying on children is running loose in the city—a wilderness of ruin caused by the Great Fire of 1872...
In the early 1870s, local children begin disappearing from the working-class neighborhoods of Boston. Several return home bloody and bruised after being tortured, while others never come back.
With the city on edge, authorities believe the abductions are the handiwork of a psychopath, until they discover that their killer—fourteen-year-old Jesse Pomeroy—is barely older than his victims. The criminal investigation that follows sparks a debate among the world’s most revered medical minds, and will have a decades-long impact on the judicial system and medical consciousness.
The Wilderness of Ruin is a riveting tale of gruesome murder and depravity. At its heart is a great American city divided by class—a chasm that widens in the aftermath of the Great Fire of 1872. Roseanne Montillo brings Gilded Age Boston to glorious life—from the genteel cobblestone streets of Beacon Hill to the squalid, overcrowded tenements of Southie. Here, too, is the writer Herman Melville. Enthralled by the child killer’s case, he enlists physician Oliver Wendell Holmes to help him understand how it might relate to his own mental instability.
With verve and historical detail, Roseanne Montillo explores this case that reverberated through all of Boston society in order to help us understand our modern hunger for the prurient and sensational.

The Wilderness of Ruin: A Tale of Madness, Fire, and the Hunt for America's Youngest Serial Killer by Roseanne Montillo is a highly recommended historical account of Boston in the late nineteenth century. Although, in reality, there is no frantic search for Jesse Pomeroy in this account, it is, nonetheless, an interesting look at 19th century Boston.

In Boston in the 1870s young boys began to disappear of turn up tortured, beaten and bloody. It turns out that the killer/torturer was 14 year old Jesse Pomeroy, a mentally ill sociopath who was convicted and sentenced to the reform school. After he was released early from the reform school, another boy was tortured and a young girl turned up dead. Pomeroy was convicted and sentenced to hang, but that was changed to life imprisonment. While detailing Pomeroy's life, Montillo includes information about the area, including the history of prisons, the treatment of mentally ill criminals, the fire of 1872, author Herman Melville, and physician Oliver Wendell Holmes.

In The Wilderness of Ruin Montillo succeeds in presenting an expertly researched, riveting look at historical 19th century Boston and some of the people who inhabited the city rather than a frantic true crime search for a psychopath. Anyone who enjoys American history or the history of Boston will likely appreciate The Wilderness of Ruin. While Pomeroy's story is disturbing, it is more interesting when placed in historical context and presented as a part of history. What is less successful is the attempt to draw a comparison between Melville and Pomeroy. I'm not sure that the forced comparison was even necessary.

The book includes black and white illustrations. As is my wont I was pleased to see that in her well documented research Montillo presents a plethora of notes, an extensive bibliography, and index.

Disclosure: My Kindle edition was courtesy of HarperCollins for review purposes.
Posted by Lori L at 5:00 AM