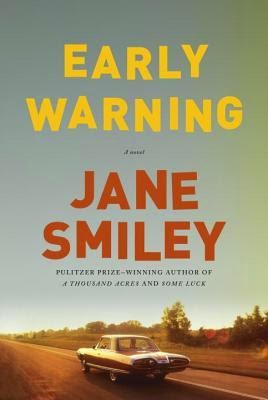 From the Pulitzer Prize-winner: the second installment, following Some Luck, of her widely acclaimed, best-selling American trilogy, which brings the journey of a remarkable family with roots in the Iowa heartland into mid-century America
Early Warning opens in 1953 with the Langdon family at a crossroads. Their stalwart patriarch, Walter, who with his wife, Rosanna, sustained their farm for three decades, has suddenly died, leaving their five children, now adults, looking to the future. Only one will remain in Iowa to work the land, while the others scatter to Washington, D.C., California, and everywhere in between.
As the country moves out of post–World War II optimism through the darker landscape of the Cold War and the social and sexual revolutions of the 1960s and ’70s, and then into the unprecedented wealth—for some—of the early 1980s, the Langdon children each follow a different path in a rapidly changing world. And they now have children of their own: twin boys who are best friends and vicious rivals; a girl whose rebellious spirit takes her to the notorious Peoples Temple in San Francisco; and a golden boy who drops out of college to fight in Vietnam—leaving behind a secret legacy that will send shock waves through the Langdon family into the next generation.
Capturing a transformative period through richly drawn characters we come to know and care deeply for, Early Warning continues Smiley’s extraordinary epic trilogy, a gorgeously told saga that began with Some Luck and will span a century in America. But it also stands entirely on its own as an engrossing story of the challenges—and rewards—of family and home, even in the most turbulent of times, all while showcasing a beloved writer at the height of her considerable powers.

Early Warning by Jane Smiley is a highly recommended second book in her planned Last Hundred Years in America trilogy. This continues the story began with Some Luck and follows the years of 1953-1986. Smiley covers one year per chapter and there is a family tree included at the beginning of the book.

Opening at the funeral of Walter in Iowa, the Langdons are now scattered across the country. Their families are growing and we are meeting the second and third generations in this multi-generational saga. You will want to start with Some Luck for a sense of continuity and in order to follow the characters in Early Warning. The series is as much a social history of the USA as it is of the Langdon family. There are a lot of characters and changes to keep track of along with all the social changes of the times.


Smiley's continues to carefully craft her story  while placing her characters firmly in the time period. She covers the decades and the historical events that happened during that time. Her writing continues to be excellent as is her ability to tell the story of various family members while keeping to her organization of by-the-year chapters.


Early Warning does suffer a little from the second-book-in-a-trilogy syndrome. It is good, but you want the stories to continue immediately rather than waiting for the next installment.


Disclosure: My Kindle edition was courtesy of Knopf Doubleday for review purposes.