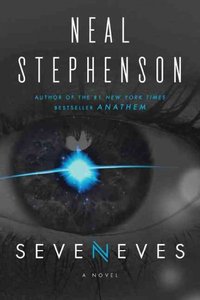 Seveneves by Neal Stephenson is a thought provoking science fiction disaster scenario and space saga covering 5000 years that is very highly recommended. This complex, epic tale is the kind of end-of-the-known-world science fiction that many of us crave. As someone who has grown weary of reading various novels that are only part of a series, let me go on record right away saying that I appreciate and applaud the fact that Stephenson gave us the complete story all in one massive book containing three parts rather than spreading it out over three books.

Seveneves opens with "The moon blew up without warning and for no apparent reason. It was waxing, only one day short of full. The time was 05:03:12 UTC. Later it would be designated A+0.0.0, or simply Zero." The moon fragments into seven large pieces that Scientist Doc “Doob” Dubois gives the school-children friendly names of Potatohead, Mr. Spinny, Acorn, Peach Pit, Scoop, Big Boy, and Kidney Bean. There are already smaller fragments of the moon falling to earth as meteorites, but, as these larger pieces begin breaking up into smaller pieces, Doob has figured out that eventually this fragmentation will lead to an event he calls the White Sky. "The system of discrete planetoids that we can see up there now is going to grind itself up into a vast number of much smaller fragments. They are going to turn into a white cloud in the sky, and that cloud is going to spread out."

A day or two after the White Sky event, the Hard Rain is going to occur. The Hard Rain is actually a meteorite bombardment that will set the earth on fire and sterilized the surface. The only way for humanity to survive is to go underground, or go into space. Humanity has approximately twenty-five months to prepare. They propose using swarming behavior observed on earth to create an ark in space called the Cloud Ark. They need to send up genetic samples of everything on earth, including humans, as well as chosen representatives from each country in a habitat to connect to the International Space Station, or Izzy, the place where the Cloud Ark will form. Roboticist Dinah MacQuarie (and many robots) and commander Ivy Xiao, along with others are on Izzy and now must anticipate new arrivals before the Hard Rain destroys life on the surface of the earth.

The quality of the writing is above reproach. Stephenson does an admirable job incorporating lots and lots of hard science, ballistics, sociology, genetics, politics, robotics, and more  into the novel and he makes all of the myriad of intricate details interesting. Along with the hard science there are also little snippets that provide a measure of comic relief at the beginning of the disaster, like the names of the seven fragments of the moon mentioned above or the website: astronomicalbodiesformerlyknownasthemoon.com or the roach motel for boys (which you will understand if you read it.) As I said, the novel is divided up into three books, with book three taking place 5000 years in the future. I really didn't have a clear clue what the title meant until over half way through the book, at which point it became clear just before the start of book three. At almost 900 pages, it takes a time commitment, but it is worth it.

Disclosure: My Kindle edition was courtesy of HarperCollins for review purposes.