The Far End of Happy

The Far End of Happy by Kathryn Craft 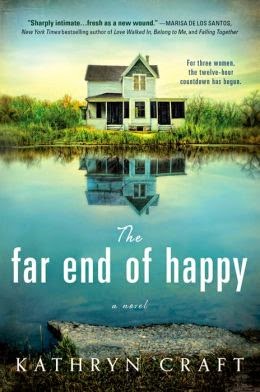 Ronnie's husband is supposed to move out today. But when Jeff pulls into the driveway drunk, with a shotgun in the front seat, she realizes nothing about the day will go as planned.
The next few hours spiral down in a flash, unlike the slow disintegration of their marriage-and whatever part of that painful unraveling is Ronnie's fault, not much else matters now but these moments. Her family's lives depend on the choices she will make-but is what's best for her best for everyone?
Based on a real event from the author's life, The Far End of Happy is a chilling story of one troubled man, the family that loves him, and the suicide standoff that will change all of them forever.

The Far End of Happy by Kathryn Craft is a very highly recommended novel about a suicide standoff and a woman trying to come up with the inner strength to make it through the horrific day.

As she is mentally preparing herself for the day, Ronnie (Veronica) Farnham contemplates, "How many months had it been since she’d been able to relax in her own home?"  Today her husband, Jeff, is supposed to move out of their farmhouse in Bartlesville, located in rural eastern Pennsylvania. Their marriage has been struggling for years, but with Jeff's increased drinking and out -of-control spending, which has led to huge credit card debt, Ronnie knows it is time to leave and try to make a future for her and her two boys.

A day that is already guaranteed to be stressful turns into a nightmare when a drunken Jeff pulls his car up to the front of the house. He has had way-to-much to drink, has a hose hanging from his exhaust pipe, a shotgun in the front seat, and is threatening to commit suicide. Ronnie and the boys manage to get the car keys and call 911, but when a crazed Jeff chases them into the house they are afraid. The police arrive but Jeff has taken off, holing up in the office of their farm store, New Hope Farms, with his gun.

The police manage to get Ronnie and the boys out of the house and off the farm. Ronnie's mother, Beverly, and Jeff's mother, Janet, meet them at the local firefighter's hall while the police have the road to the farm and the area locked down and under surveillance. The 12 hour standoff has begun. Ronnie manages to get the boys to a friend's house for the day, but she is stuck waiting, with her mother and mother-in-law. The story is told through Ronnie, Beverly, and Janet. Ronnie discovers that there are more family secrets than she thought, as the truth is slowly revealed during the tension packed standoff. We also learn more about the families and the history of each character as each woman reflects on her life.

Even as I felt the tension ratchet up during the twelve hour standoff, I also could see the personal reflection from each character as they wondered if they had a role in the day's tragic events. Could the marriage have been saved? Did any one action push Jeff over the edge? At the same time secrets are revealed that might have been helpful if they were made known, if risk factors were discussed. There are a wide range of emotions and questions that would plague anyone in this situation. Craft also realistically includes the ever-present media and their following of the "story."

I was totally engrossed in this well written, engaging story from start to finish and only learned afterwards that it was based on a personal experience by Kathryn Craft. That would explain her uncanny ability to capture the genuine, raw emotions  of each character and honestly confront the effects depression, alcoholism, and suicide can have on a family.

Disclosure: My Kindle edition was courtesy of Sourcebooks via Netgalley for review purposes.
Posted by Lori L at 5:00 AM