The Mercy of the Sky

The Mercy of the Sky: The Story of a Tornado by Holly Bailey 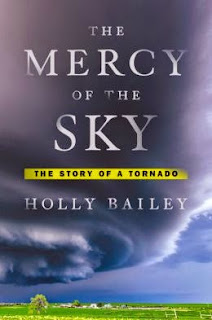 The Mercy of the Sky: The Story of a Tornado by Holly Bailey is a very highly recommended account of the two tornadoes that hit Moore and El Reno, Oklahoma in May of 2013. Most of the book focuses on the May 20, 2013 tornado that hit Moore, Oklahoma, a suburb south of Oklahoma City. Bailey's narrative reads like a nail-biting thriller; even though you know the outcome, the tension is palatable as the storm approaches. This tornado was a massive mile-wide twister with winds in excess of 200 miles per hour that hit during the day, and destroyed two schools. Twenty-five people were killed, seven of which were third graders at the Plaza Towers Elementary School who had their school collapse on top of them. This tornado was one known as "a 'grinder' as it took its time chewing neighborhoods into tiny bits."

The El Reno tornado hit just eleven days after this, on May 31. This tornado was at least 2.6 miles wide and is the largest tornado on record. Both of these monsters were EF5 tornadoes on the Enhanced Fujita scale.

Bailey, a reporter, does an excellent job chronicling the story, and the history of storm forecasting in Oklahoma, through several key individuals, including: Gary England, the renowned and trusted weatherman at CBS affiliate KWTV, Mike Morgan and Damon Lane his rivals; Amy Simpson, the head principal at Plaza Towers Elementary in Moore; Steve Eddy, city manager of Moore; Rick Smith, of the National Weather Service in Norman; Howard Bluestein, a well-known meteorology professor at OU; and several others.

As a native Oklahoman, Bailey was compelled to tell what happened in Moore. She understands that most of us who live in tornado alley follow the weather very closely and those in Oklahoma, perhaps, the most. She "knew I wanted to tell the longer story of what had happened here. As a native, I knew how people felt about the weather, how they loved it and feared it all at the same time. I wanted to know what it was like being in the path of a tornado that seemed bigger than life itself as it bore down on the city from the west. I knew I had to chronicle the story of those who survived one of the worst tornadoes in history  - and those who didn’t make it."

I vividly recall both of these tornadoes. As a resident in several different communities all located in tornado alley over the years, I, too, have my first memory of a night of storms, flooding, and tornadoes that hooked me on meteorology for life. This interest often has me watching weather radar for different areas of the country, including this massive storm system. More importantly the Moore tornado of 2013 has changed the way the local elementary school where I work conducts our tornado drills, including where we go and the position of the students. I'm certain that this tornado must have changed the way tornado drills are conducted and the locations where students must go for other school districts too.

Disclosure: My Kindle edition was courtesy of Penguin for review purposes.