The Life and Death of Sophie Stark

The Life and Death of Sophie Stark by Anna North 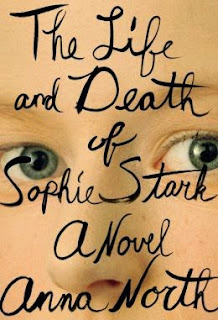 The Life and Death of Sophie Stark by Anna North is a highly recommended novel that exposes the truth behind the artist.

Acclaimed filmmaker Sophie Stark is an enigma, even to those who know her best. This haunting novel tells us about the life of Sophie through the voices of six different individuals who knew her best. Each chapter is the voice of one of these six individuals, while not a word is heard directly from Sophie. What we gather and learn about her character is all filtered through the experiences of others.


The six voices include: Allison, Robbie (Sophie's brother), Jacob, Daniel, George, and Benjamin Martin. Allison was romantically involved with Sophie and the story of her family became Sophie's movie Marianne. Robbie is ever protective of Sophie and in college helps her with her first movie, Daniel, a documentary of her obsession with college basketball player. Sophie makes a video for musician Jacob and they get married briefly. She betrays him when the story of his mother becomes her next movie, Woods. Daniel was the college basketball star in her first movie. George is a successful screenwriter who Sophie uses for his contacts and makes the movie Isabella. Benjamin Martin is the film critic whose reviews of Sophie's films are included between each chapter.

It is clear that Sophie is an enigma even to those who know her best. We know that Sophie has always been a loner and found it difficult to connect with other people. She was born as Emily Buckley, but changed her name. She unapologetically uses people and their lives to further her art. Does she really feel love or care for anyone besides herself and her vision? She is driven and focused. Her vision for a film and her creative process supersedes all personal relationships. Clearly she is talented, but what cost does she extract from those around her while working on her films? Is the final creation of art enough to excuse personal  betrayal? Must a great artist always be tortured?

North's writing is excellent which helps make The Life and Death of Sophie Stark an engrossing literary story puzzle. The individual stories each add some essential pieces to the puzzle and work together to make a more complete picture of who is Sophie Stark. They don't explain everything. This is a puzzle with missing pieces. What North leaves us with, after these stories from those who knew her, is that the legacy Sophie Stark has left behind is her films that, presumably, might fill in some of the missing holes and help explain her life.

Disclosure: My Kindle edition was courtesy of the Penguin Publishing Group for review purposes.
Posted by Lori L at 1:03 PM