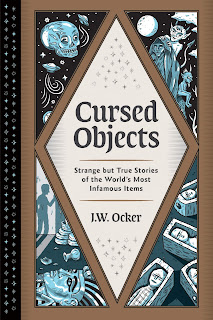 Cursed Objects: Strange but True Stories of the World's Most Infamous Items by J. W. Ocker is a highly recommended look at several cursed items which are explained and described in an informative and sometimes hilarious way.

Ocker makes it clear in the introduction that you don't have to believe in cursed objects to be interested in the stories surrounding them because a large part of the curses are the stories and tragedies that surround the various objects. The stories are what gave then the reputation of being cursed and the curses are remembered through the retelling of the stories.  There are so many cursed items around the world that Ocker chose the objects for this book as follows: "Could I inadvertently pick it up at a flea market or an antiques store and bring it into my home? or Could I brush up against it in a museum and be forever damned? And, with a handful of notable exceptions, that’s exactly what is included in this book."

Included with the scary stories surrounding the objects and their curses are witty, funny, and irreverent remarks that help lighten the mood, which some of us might need after reading about many cursed objects. Objects are divided up into seven different categories. The book includes illustrations of various objects, a selected bibliography and index. (The illustrations are very nice, but I couldn't help but want pictures of the objects.)


Contents include:
I. Cursed Under Glass: The Hope Diamond;  Ötzi the Iceman;  M-Aori Taonga; The Tomb of Tutakhamen; Muramasa Swords; The Unlucky Mummy; The Ring of Silvianus
II. Cursed in the Graveyard: The Black Aggie; The Bjorketorp Runestone; The Tomb of Timur; The Black Angel;The Gravestone of Carl Pruitt; The Bronze Lady; Shakespeare's Grave
III. Cursed in the Attic: The Crying Boy Paintings; The Baleroy Chair of Death; The Dybbuk Box; The Basano Vase; Rudolph Valentino's Ring; Robert the Doll; Busby's Stoop Chair; The Conjured Chest
IV. Cursed in Stone: The Little Mannie with his Daddy's Horns; The Cursing Stone; The monogram of Patrick Hamilton; The Cursed Pillar; The Hexham Heads; The Amber Room; The Treasure of Cahuenga Pass
V. The Business of Cursed Objects: Annabelle the Doll and the Warren Collection; John Zaffis Museum of the Paranormal; Zak Bagans's The Haunted Museum; The Traveling Museum of the
Paranormal and Occult; Cursed on Ebay
VI. Why Aren’t These Objects Cursed?: The Mummified Head of the Dusseldorf Vampire; The Mitchell-Hedges Crystall Skull; The Miniature Coffins of Arthur's Seat; The Skin Book of James Allen; The Antikythera Mechanism
VII. The Curse in the Machine: The Prague Orloj; The Hungarian Suicide Song; James Dean's Porsche 550 Spyder; 0888-888-888; The Berzerk Video Game Cabinet; Chain Emails
Plus there are extra chapters included in each section


Disclosure: My review copy was courtesy of Quirk Books.