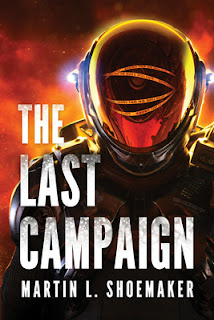 The Last Campaign by Martin L. Shoemaker is a highly recommended political thriller/murder mystery/procedural science fiction novel set on a Mars. This is a sequel to The Last Dance.

Rosalia Morais and Nicolau Aames are a couple who have established a life together in Maxwell City on Mars. The city is fast growing and with that crime is on the rise. When Rosie accepts the position as the first Sheriff of Maxwell City, she immediately begins to build a team and install in them a sense of responsibility and accountability, but can she get her team ready for arson, insurance fraud, political conspiracies, and murders? Suddenly Rosie has a murder and a huge mystery to solve that could affect the future of colonists on Mars.

Essentially The Last Campaign is a political thriller/procedural/mystery set on Mars. The science fiction aspects are basically the setting which put some limitations on actions and movements as they go through their daily lives on Mars and the background of the characters. It also feels in some ways like it is the story of a new Sheriff in town in the Old West, albeit a strong female Sheriff. But there are a whole lot of political machinations going on in this novel, so if you like political thrillers this may be a good choice for you. The interconnected cases are all tied into politics. The reelection shenanigans and muckraking reporter in the plot feel rather pertinent today.

The plot is solid, descriptive, and interesting. Descriptions of living on Mars are simply the background to the mystery. I haven't read the first book in the series, The Last Dance, which meant I was lacking some background stories and details that might have made my experience with the novel filled with a richer understanding of the characters and the colony. Personally, I didn't quite connect with the characters. Although they are developed, I didn't feel I knew them as well as people who read the first book. I also felt like the dialogue could have been written to flow more smoothly and in a realistic, conversational style.

Disclosure: My review copy was courtesy of 47North.