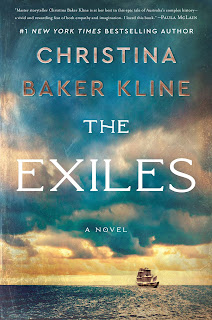 The Exiles by Christina Baker Kline is a highly recommended historical novel which follows three women in nineteenth-century Australia.

Evangeline, a young governess in London, is sent to the notorious Newgate Prison when her pregnancy is discovered. After several months in jail, she is sentenced to being deported to Van Diemen’s Land, a penal colony in Australia. During the journey Evangeline strikes up a friendship with Hazel, a girl who was sentenced for stealing a silver spoon. Hazel happens to be a midwife and herbalist, which is good because Evangeline's baby will be born on the journey.

In Australia, the British government in the 1840s has been forcibly relocating the native inhabitants and seizing their land. One of these relocated people is Mathinna, the orphaned daughter of the Chief of the Lowreenne tribe, who has been adopted by the new governor of Van Diemen’s Land.

The Exiles documents and recreates the beginnings of Australia from a modern perspective. The writing, based on her exhaustive research, is excellent. She does capture the opportunity and freedom that Australia offers while following the hardships and trials of her characters, although the bulk of the novel is the research, starting with the brutal sentencing for crimes during that time period and on to the colonization. While she does not romanticize the time period, readers new to the historical background presented will likely be more entrenched in the novel than those of us who know the history and background of Australia and are looking for a strong plot and well-developed characters.

Chapters alternate between the stories of Evangeline, Hazel, and Mathinna, following their lives and fates. The Evangeline and Hazel chapters are more compelling than the Mathinna ones, but it is understandable why the inclusion of her character made sense for the book.

The review will be posted on Amazon and Barnes & Noble.
Posted by Lori L at 11:43 AM