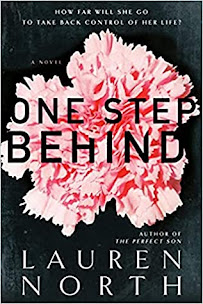 One Step Behind by Lauren North is a recommended stalker story of psychological suspense.

Jenna Lawson is a doctor, wife, and mother. For over a year she has been the ongoing victim of stalker who keeps leaving her frightening gifts. She can feel herself being watched and has sighted her stalker several times. Jenna is at a breaking point. She is barely sleeping and is on edge and wary all the time. She immediately reports all the incidences to the police, but they haven't been able to find the culprit. When a man is brought into the emergency room where Jenna works, she immediately recognizes him as her stalker. He is put into a medically induced coma and Jenna can't help herself, she looks at his phone. On it she finds images of her and her kids as well as another mother who she knows.

Inserted into the main story line are chapters about a personal trainer, Sophie, who is worried about her brother, Matthew. The two shared a difficult childhood. These chapters go back in time to when her parents first adopted Matthew and when Sophie was always admonished to take care of her brother. This seems to be the ongoing theme of their adult lives too, but Sophie is tired of taking care of Matthew and living with her overbearing controlling boyfriend.

North does depict the increasingly poor decisions Jenna is making due to the stress and paranoia she is experiencing. You do begin to wonder briefly if she is doing this to herself.  But then it becomes more clear that, while the main characters are well-developed, they also all seem to be troubled and, well, become annoying after a while. After several chapters they begin to grate on your nerves. I pressed on because it's a stalker story and I wanted to get to the twist that had to be coming. The twist came, but it wasn't quite as satisfying as I was hoping.

Basically, though, the writing is good. North is a writer to watch in the future. She did a good job increasing the tension and suspense, although the novel did go on a bit too long. In the future more care needs to be taken before adding a few plot points that were improbable and simply couldn't happen.