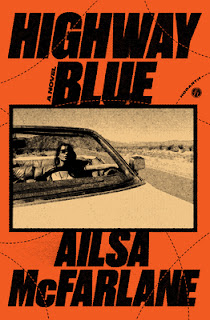 Anne Marie, 21, has been living in the town of San Padua since her husband, Cal left her two years ago after exactly one year of marriage. Since he left she has been struggling to get by, just surviving and trying to forget. When Cal suddenly shows up and asks her out for a drink, she agrees, but soon it becomes clear that he is in trouble and wants help from her. A violent encounter after this sends the two on the run together, escaping San Padua, but with no clear idea of their destination or what awaits them.

This is written as a classic road trip novel and almost feels like it is set years ago as the two flee by hitchhiking down the coast. Described as a story of love and of being lost and found, the novel has more of a dreamlike quality to it. It doesn't feel like it is occurring in the present day world. It feels like it is set much earlier, maybe in the sixties or seventies, with the exception of a few current technological advancements mentioned. The novel is, however, carefully crafted and the quality of the writing shows promise for future works. As Anne Marie recalls and explores her memories of her relationship with her mother, we can see a glimmer of where her problems may have began, but it feels like McFarlane holds back information, leaving the reader wanting more.

The writing itself is descriptive and sets the whole tone of Highway Blue. The characters are both well written and will produce sympathy in readers. They also both seem to be powerless in the face of their situation, as if the only way to take control is to run away. Anne Marie and Cal seem like lost souls who need to find their footing. The narrative is told through Anne Marie's voice and impressions. We know that she has changed since Cal left as he often mentions it and she knows it, she also, to some extent, tries to be the young woman he married. McFarlane is a new writer to watch.

Disclosure: My review copy was courtesy of Penguin Random House in exchange for my honest opinion.
Posted by Lori L at 12:38 PM