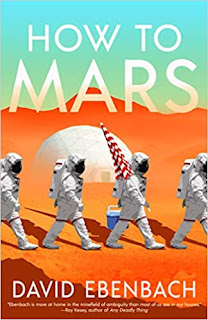 How to Mars by David Ebenbach is a highly recommended amusing science fiction tale about an unexpected pregnancy among the scientists on a reality TV show set on Mars.

After an arduous screening process, six scientists were selected for a one-way ticket to Mars where they would conduct research for the reality TV show following them. The handbook of the Destination Mars! corporation clearly stated repeatedly that intercourse between contestants is prohibited and pregnancy is not allowed. Nonetheless, Jenny, an astrophysicist, and Josh, a psychologist, have a romantic relationship and Jenny discovers she is pregnant. The other scientists on the team, Stefan, Roger, Nicole and Trixie, have various responses as Jenny's pregnancy progresses and odd things begin to occur on the base. The reality TV show, which was cancelled due to low ratings, has started up again with the pregnancy and ratings are high.

The narrative is told through the point of view of Josh, Stephan (the engineer), the Patterns (ethereal life on Mars), Jenny's notes, and through excerpts from the Destination Mars! handbook. Parts of the novel have an absurd, lightheartedness that will bring to mind The Hitchhiker’s Guide to the Galaxy, especially the abundance of towels sent to the base. Other parts are thought provoking and poignant as six very different scientists are living together with no return trip to Earth planned. As with any group, there are conflicts, disagreements, and stress, but the group is also a family. Sure, they are a dysfunctional family, but they are working together doing the best they can.

The plot is really about the characters and their interaction, because Mars is just rocks, rocks, and more rocks. One of the heated discussions is the question if Mars orange or red. The characters are interesting personalities and we learn more personal facts about Josh, Jenny, and Stephan, as the plot follows Jenny's pregnancy and how it affects life on Mars - all life on Mars. This is an interesting, fun take on the establishment of a base on Mars and the interaction of the inhabitants.

Disclosure: My review copy was courtesy of Tachyon Publications in exchange for my honest opinion.