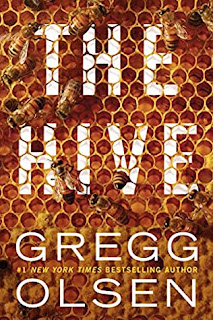 The Hive by Gregg Olsen is a highly recommended investigative procedural and mystery set in the Pacific Northwest.

Detective Lindsay Jackman is investigating the murder of a college student, Sarah Baker. While Lindsay is investigating the murder, she is also dealing with trying to understand why her partner and father figure Detective Alan Sharpe killed himself. Lindsay soon discovers that Sarah was a journalist who was interviewing people and digging into the past history of Marnie Spellman and the close knit group of women associated with her twenty years ago who were called The Hive. Spellman runs her cosmetic empire and is a charismatic lifestyle and wellness guru on her Lummi Island farm where she has bee hives and grows lavender. Women have flocked to Marnie for years after hearing her message and reading her book, but as Lindsay's investigation continues it becomes clear that there was an ominous side and hidden secrets in the Spellman empire and, as Sarah discovered, it is linked to the murder of Calista Sullivan twenty years ago.

The narrative follows Lindsay's current investigation and, as she questions hive members and others associated with or had family members in the cult, there are numerous flashbacks telling what happened in the past to each person. It is clear that everyone is hiding something and no one is telling the complete truth to Lindsay. The plot plods along as people are interviewed by Lindsay and then we learn they are hiding secrets or withholding information. Rinse, repeat. It is also clear that Marnie is a self obsessed narcissist who is using her followers for her own enrichment and advancement.

All the characters are very detailed and presented as complicated individuals. The impetus to keep reading is based on reaching the denouement to learn more about the characters and to see if your predictions about the ending are going to be true. There aren't any surprises or twists; most readers are going to know where the plot is heading early on, so the enjoyment is found in the characters and the specifics of what happened twenty years ago and how it is connected to the current case. It is also an interesting examination of cults, how followers can be exploited by an unscrupulous and deranged leader.

Disclosure: My review copy was courtesy of Thomas & Mercer.
Posted by Lori L at 12:18 PM