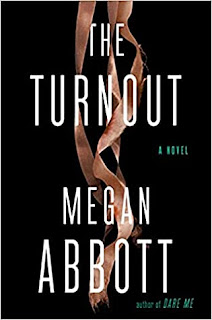 The Turnout by Megan Abbott is a highly recommended atmospheric novel of secrets featuring sisters who run a ballet school.

Dara and Marie Durant were raised to be ballet dancers by their mother, the founder of the Durant School of Dance. Now the sisters along with Dara's husband, Charlie, who was a former dancer, run the school after the death of the sister's parents. The problems begin when Marie moves out of the home they grew up in and where the three were all living. She moves into the top floor of the ballet school. This inadvertently causes a fire that brings the contractor, Derek, into their lives which is the catalyst for a series of mishaps, tension, and suspicious accidents. All of this occurs right as the school is preparing for the yearly performance of The Nutcracker.

Set in the world of ballet, Abbott has a plethora of information about what happens behind the scenes, the pain, the injuries, and the endurance required to succeed and excel. Adding to information, the narrative hints at a mysterious, concealed secret that more is going on than is apparent at first. This cryptic feeling becomes more intense when Marie's abusive relationship with Derek becomes known. The whole time there is still this atmosphere of secrets, of information hidden, and a covert agenda being played out. The narrative is akin to a horror story of accidents and ill intentions colliding with tightly wound personalities. The characters are well-described as separate individuals, all with secrets and expectations.

Abbott's writing is part of what makes The Turnout a highly recommended novel. While at times the plot drags, the descriptive writing remains wonderfully vivid. It not only introduces you to the world of triumph and pain in the world of dance, it creates a somber mood and the anticipation of dread in the narrative. Abbott writes that "Ballet was full of dark fairy tales," and this whole novel is a complex tangle of grim tales which culminate in a breath-taking final scene. The plot complications and revelations are slowly and carefully revealed in The Turnout and the suspense becomes palpable.


Disclosure: My review copy was courtesy of Penguin Random House.
Posted by Lori L at 12:59 PM