When Grief Calls Forth the Healing

When Grief Calls Forth the Healing by Mary Rockefeller Morgan 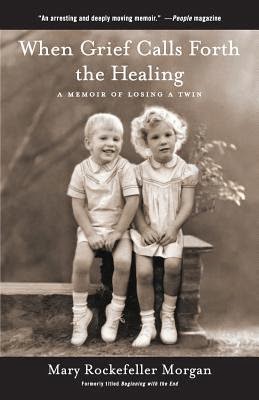 In 1961, Michael Rockefeller, son of then-governor of New York State Nelson A. Rockefeller, mysteriously disappeared off the remote coast of southern New Guinea. Amid the glare of international public interest, the governor, along with his daughter Mary, Michael’s twin, set off on a futile search, only to return empty handed and empty hearted. What followed were Mary’s twenty-seven-year repression of her grief and an unconscious denial of her twin’s death, which haunted her relationships and controlled her life.

In this startlingly frank and moving memoir, Mary R. Morgan struggles to claim an individual identity, which enables her to face Michael’s death and the huge loss it engendered. With remarkable honesty, she shares her spiritually evocative healing journey and her story of moving forward into a life of new beginnings and meaning, especially in her work with others who have lost a twin.

When Grief Calls Forth the Healing by Mary Rockefeller Morgan is a highly recommended memoir of how healing finally took place for Mary Rockefeller Morgan after the death of her twin brother Michael in 1961 when he disappeared off the coast of  southern New Guinea. Mary joined her father, Nelson A. Rockefeller, who was governor of New York, in the search for Michael in New Guinea. He was never found and eventually pronounced legally dead in 1964.

As twins, Mary and Michael were close and had a special bond. Because the interconnectedness of twins was not really understood or accepted, it took 27 years for healing to finally start to take place. Her memoir is divided into four parts. The first two deal with the events following Michael's disappearance. She recalls the search effort, growing up with Michael, and most importantly how family dynamics and the movements of the time help create a toxic environment that didn't allow her to take the steps she needed in order to heal. The third section of the book recounts her experiences with a wilderness healing retreat. In the final section Mary Rockefeller Morgan explains twin bonding and how she now helps those who have lost a twin find healing.

Mary Rockefeller Morgan, LMSW, is a licensed psychotherapist and certified imagery guide and trainer. She has had a general psychotherapy practice in Manhattan since 1991 and is now specializing in twin loss and bereavement counseling.

I found this memoir interesting and certainly it could be a resource for those who have lost a twin and searching for ways to help their recovery. It is also a touching tribute to her memory of Michael and the legacy he left behind. This is a very specific, personal account, however, and not a general guide for healing after the grief of losing a loved one. I also found it rather sad that it took her so many years to find peace and healing, although it is uplifting that she is helping others find healing sooner.

Disclosure: My Kindle edition was courtesy of Open Road Integrated Media via Netgalley for review purposes.