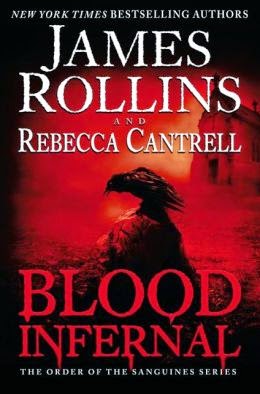 
As an escalating scourge of grisly murders sweeps the globe, archaeologist Erin Granger must decipher the truth behind an immortal prophecy, one found in the Blood Gospel, a tome written by Christ and lost for centuries: The shackles of Lucifer have been loosened, and his Chalice remains lost. It will take the light of all three to forge the Chalice anew and banish him again to his eternal darkness. With the Apocalypse looming and the very barriers of our world crumbling, Erin must again join forces with Army sergeant Jordan Stone and Father Rhun Korza to search for a treasure lost for millennia, a prize that has already fallen into the hands of their enemy.
But the forces of darkness have crowned a new king, a demon named Legion, who walks this Earth wearing many faces, whose reach is beyond measure, where even the walls of the Vatican fall before him. To have any hope of saving the world, Erin must discover the truth behind man's first steps out of the Garden of Eden, an event wrapped in sin and destruction, an act that damned humankind for eternity.
The search for the key to salvation will take Erin and the others across centuries and around the world, from the dusty shelves of the Vatican's secret archives to lost medieval laboratories, where ancient alchemies were employed to horrific ends. All the while, they will be hunted across the breadth of the globe, besieged by creatures of uncanny skill and talent. As clues are slowly dug free from ancient underground chapels or found frozen in icy caverns high in the mountaintops, Erin will discover that the only hope for victory lies in an impossible act, one that will not only destroy her, but all she loves. To protect the world, Erin must walk through the very gates of Hell and face the darkest of enemies, the adversary of humankind, the very serpent in the garden. She must confront Lucifer himself.

Blood Infernal by James Rollins and Rebecca Cantrell is the recommended third and final book in their Order of the Sanguine/vampire trilogy.


There is a battle between good and evil, light and dark and there are three people who are destined to stop it. All of them are a part of an ancient Vatican order. Archaeologist Dr Erin Granger is the Woman of Knowledge who has possession of the Blood Gospels. Sergeant John Stone is the Warrior of God. Rhun, a Sanguinist priest, is The Knight of Christ. Together these three must stop the Strgoi , demons and Lucifer from taking over and ruling the world.


Sanguinists are vampire priest and nuns who are dedication to the Lord and can slake their thirst for blood with wine. Strgoi are evil vampires who feed on the blood of humans and cause death and destruction. Rollins and Cantrell provide non-stop action, as the three follow clues and figure out riddles while experiencing  deception, terror, and battles along the way.


While the novel is clearly well written readers will also have to buy into Rollins and Cantrell re-interpreting Catholicism and Biblical history, as well as their version of vampires. Also note that this is the third book in a series, following The Blood Gospel and Innocent Blood, and two novellas, Blood Brothers and City of Screams. I read Blood Infernal after only reading one of the novellas and can attest that it might help to read the three in order, which means you'll need to clearly be willing to make that time commitment to a vampire story, albeit an extremely well written and intelligently conceived vampire story. The comparisons to Dan Brown's books are a given. I'll have to admit that I have liked all of the other books by Rollins that I've read more than this one.


Disclosure: My Kindle edition was courtesy of HarperCollins for review purposes.
Posted by Lori L at 2:56 PM