Some Other Town by Elizabeth Collison 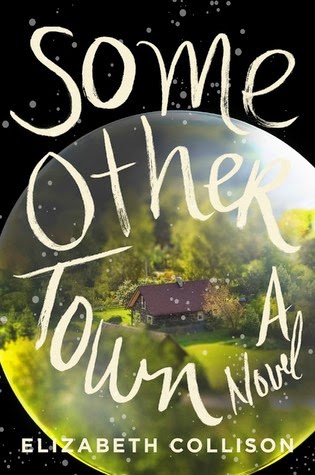 "But here is the strangest part. Now in the mornings when I wake from the dream, for an instant it's as if there are two of me. The one that will rise and go off to work and come home again to Mrs. Eberline. And the one that awakes from the dream of the van and feels something inside of her rising. Quickening, yearning, keening."

Margaret Lydia Benning, twenty-eight and adrift, still lives in the same Midwest town where she went to college. By day, she works at the Project, a nonprofit publisher of children's readers housed in a former sanatorium. There she shares the fourth floor with a squadron of eccentric editors and a resident ghost from the screamers' wing. At night, Margaret returns alone to her small house on Mott Street, with only her strange neighbor, Mrs. Eberline, for company.
Emotionally sleepwalking through the days is no way to lead a life. But then Margaret meets Ben Adams, a visiting professor at the university. Through her deepening relationship with Ben she glimpses a future she had never before imagined, and for the first time she has hope . . . until Ben inexplicably vanishes. In the wake of his disappearance, Margaret sets out to find him. Her journey, a revelatory exploration of the separate worlds that exist inside us and around us, will force her to question everything she believes to be true.
Told through intertwined perspectives, by turns incandescent and haunting, Some Other Town is an unforgettable tale, with a heartbreaking twist, of one woman's awakening to her own possibility.

Some Other Town by Elizabeth Collison is a highly recommended, surrealistic novel about a woman who has fallen in love.

Margaret Benning, 28, has bought a stone house on Mott Street and settled into the same town where she attended college. She lives next door to Mrs. Eberline, a woman who is likely insane and certainly has the potential to cause some serious trouble. Margaret works for the Project, a grant funded business devoted to writing  beginning readers for children. The Project is located on the grounds of what was a sanatorium for TB patients. It is still referred to as the Sanatorium even though it now is the home for a wide variety of endeavors and programs.

Three months ago Margaret broke up with Ben Adams, a visiting art professor that she met at a gallery opening. Ben, 16 years her senior, could have been the love of her life, but she hasn't heard from him in 3 months. Mrs. Eberline is demanding that she go find him, insisting that Ben is in danger, but Margaret seems hesitant, perhaps because Ben was married or perhaps it was from their last encounter.

The writing in Some Other Town has a dream-like, ethereal quality. I began to question what was real, and wondered what parts should I take note of and what characters should I care about. I briefly speculated that all the characters were ghosts. While Collison's writing quality is quite good, it seems that something was not quite hitting the mark for me in the presentation. It could be the dream-like detachment she has given to Margaret and Ben in the novel permeated how I felt about it. We hear both of their voices, but mainly it is Margaret's voice you will be paying attention to.

Margaret seems strangely detached from everything, which, although it is explained by the ending, did make it hard to care about her through the whole novel. I couldn't understand why Margaret wasn't calling the police on Mrs. Eberline. There is no way someone would ever tolerate that behavior from a neighbor. The encounters between her co-workers at The Project provided some much needed comic relief, but even then Margaret wasn't engaged with them - even though the reader is seemingly expected to care about their antics.

In some respects, the ending gave me more respect for the book than I initially had. The problem is that some readers are not going to stick with the book to get to that ending. Yes, it is technically very well written, almost poetic at times, but it is also an unconventional presentation that requires readers to take note of everything and care about the characters in spite of the enigmatic qualities of the novel. 3.5

Disclosure: My Kindle edition was courtesy of HarperCollins for review purposes.

I am one of the book bloggers who received a copy of "Some Other Town" too! I was looking forward to talking to other readers who've read this novel, and thus far I have only found four of us total!

You were picking up on the the 'secret' of the plot, when you were talking about whose voice was stronger vs whose voice was growing a bit dim and quiet. Both of their timelines were running alongside each other, until there is a fork in the paces where Margaret's timeline moves at a different rhythm than Ben's.

Ironically, I did soak into the workplace as if it were a soap opera drama; work is a bird of it's own feather. It is a vacuum of space where you are around people you may or may not wish to socialise with outside of that world, but of whom become a part of who you are whilst your there.

There are a few red herrings, I will admit, because I think Collison wanted to encourage us to dig deeper into the subtext and understand where the undertone of her novel's heart was attempting to shift our view. She wanted to change perspectives on everything, including life and death.

I enjoyed finding your thoughts, your welcome to PM me on Twitter or via my blog anytime if you wanted to talk about this more! I keep trying not to reveal too much so not to spoilt it for readers who've not yet read the story!