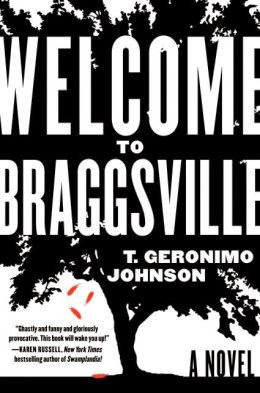 Welcome to Braggsville. The City That Love Built in the Heart of Georgia. Population 712.
Born and raised in the heart of old Dixie, D'aron Davenport finds himself in unfamiliar territory his freshman year at UC Berkeley. Two thousand miles and a world away from his childhood, he is a small-town fish floundering in the depths of a large hyperliberal pond. Caught between the prosaic values of his rural hometown and the intellectualized multicultural cosmopolitanism of "Berzerkeley," the nineteen-year-old white kid is uncertain about his place, until one disastrous party brings him three idiosyncratic best friends: Louis, a "kung fu comedian" from California; Candice, an earnest do-gooder from Iowa claiming Native roots; and Charlie, an introspective inner-city black teen from Chicago. They dub themselves the "4 Little Indians."
But everything changes in the group's alternative history class, when D'aron lets slip that his hometown hosts an annual Civil War reenactment, recently rebranded "Patriot Days." His announcement is met with righteous indignation and inspires Candice to suggest a "performative intervention" to protest the reenactment. Armed with youthful self-importance, makeshift slave costumes, righteous zeal, and their own misguided ideas about the South, the 4 Little Indians descend on Braggsville. Their journey through backwoods churches, backroom politics, Waffle Houses, and drunken family barbecues is uproarious at first but has devastating consequences.

Welcome to Braggsville by T. Geronimo Johnson is a highly recommended novel that faces down some stereotypes and assumptions with amazing wit and insight.

D'aron Little May Davenport has left his hometown of Braggsville, Georgia, to attend college as far away from Georgia as he can get - the University of California, Berkeley. He and Louis Chang, his roommate and an aspiring comedian, meet Candice, an Iowan, and Charlie, a black prep school student at a dot party where the four are accused of being insensitive. Soon they become close friends and dub themselves the "4 Little Indians."

The four friends take a class called "American History X, Y, and Z: Alternative Perspectives," which spurs them on to make their first political statement of outrage, which fails miserably. When D'aron mentions that Braggsville has a Civil War re-enactment the group decides to go to Georgia and stage a protest that is more a performance piece than based on any true social outrage. The performance goes terribly wrong and suddenly the students and the town are confronting some racial and social realities, as well as other ideological positions that they never anticipated.

Johnson opens the novel with a glossary of terms the students will be using, which should clue you in that this is mainly a humorous novel,  even while it brings some serious topics to light. There are a lot of preconceptions of many makes and ideologies, all presented with keen insight and satire. Johnson presents real historical social situations and makes connections between them, while shifting from comedy to tragedy. The main exploration is of racism in the South and the tension that still exists.

This is a well written novel. I'll admit feeling a bit of distance from the characters at the beginning, as they seemed to me to be so very young and naive. As the novel progressed, I appreciated Johnson's skill much more because of the way he allows his characters to grow amidst all the contradictory elements we see around us in contemporary America.

Behind the Book Essay
Posted by Lori L at 5:00 AM