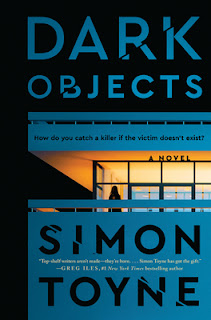 When a woman is murdered in a London mansion there are several questions that immediately come forth. The woman has 4 objects surrounding her, a stuffed unicorn, a couple of medals, set of keys, and the book, How to Process a Murder by Laughton Rees. The book may have actually assisted the killer in committing the crime without leaving clues for the forensic team. Even more puzzling is the fact that the woman, Kate Miller, does not seem to exist and neither does her husband, Mike. There is no real information on either of them.

Detective Chief Inspector Tannahill Khan of the North London Murder Squad investigates the murder. A complication is immediately part of the case as Laughton Rees is the estranged daughter of Metropolitan Police Commissioner John Rees, Laughton is having concerns about her daughter and bullying in the school she attends. Somehow the killer has made Laughton part of the investigation and perhaps even a target.

The opening is very strong and crates tension immediately. After this the point-of-view alternates between several narrators, mainly Tannahill or Laughton as well as other characters, and the rise of the tension slows down as information is uncovered. Part of the plot includes Laughton's backstory and the ongoing problems with her teenage daughter. Laughton adds a real depth to the story. Both Tannahill and Laughton are appealing characters and work well together.

This is an extremely well written  thriller that should appeal to all those who enjoy and appreciate police procedurals. I did feel like the tension and appeal lessened a bit after the initial opening but then increase again closer to the ending. There are some twists and surprises and the ending ties up all the storylines.


Disclosure: My review copy was courtesy of the HarperCollins via Edelweiss.
Posted by Lori L at 1:20 AM