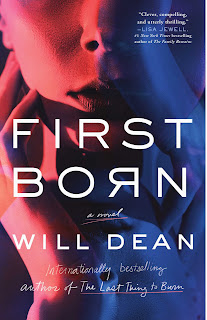 Molly and Katie Raven are identical twins, but have opposite personalities. Molly lives a quiet, life life in London following her routines while Katie is off living in NYC and taking all sorts of risks. Then Molly hears that her better half, her twin, has been murdered in NYC. She needs to do the unthinkable and actually take a flight to NYC and join her parents to bring Katie's remains home. Once there, as she tries to come to terms with what happened, she realizes that Katie was not who she though she was.

Molly is the narrator of the story and we view everything through her extreme caution and carefulness when undertaking any activity. The first part of the story moves along at an even pace and rolls along as a good, but average psychological thriller until the first huge twist, which totally changed the whole story and requires you to suspend disbelief. At this point I was shocked by one simple sentence and had to read it twice. Once I reached the second big twist leading up to the end it was almost too much.

The writing is very good and the even paced plot is totally engrossing. I was enmeshed in it throughout the entire novel and invested in the characters. But, then I was actually surprised followed, unexpectedly, by being shocked. Both twists are surprising but the second is truly shocking. They are both handled well and integrated into the story, however, you do have to go with the flow and suspend any and all disbelief.

Molly is a damaged but believable narrator and Katie also is depicted as a realistic character whose personality takes an opposite direction from her twin. It is known how close twins can be so your sympathy is strong and firmly with Molly trying to live her life without her other half. 4.5 rounded up

Disclosure: My review copy was courtesy of Simon & Schuster.
Posted by Lori L at 11:41 AM