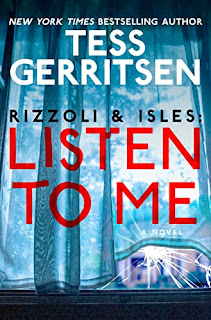 Listen to Me by Tess Gerritsen is a very highly recommended investigative procedural combined with an unofficial neighborhood watch. This is the thirteenth novel in the Rizzoli & Isles Series.

Boston homicide detective Jane Rizzoli and her partner, Barry Frost are investigating the murder of Sofia Suarez, a widow and nurse. Medical examiner Maura Isles is also on the case. Sofia was liked by everyone and no one can believe there would be a reason for the horrific murder. Rizzoli and Frost follow the clues, including her calling burner phones. It seems Sophia knew something, but what? And how does it tie into a hit and run accident injuring Amy Antrim from months earlier and the man now seemingly following her.

During the same time Jane's mother, Angela, has several neighborhood events that she thinks Jane needs to investigate. First a teenager has runaway down the block and the police aren't taking it seriously. More importantly, a new couple has moved into the neighborhood. Not only did they reject her welcome to the neighborhood zucchini bread, but they are suspiciously keeping to themselves and there appears to be a lot of construction noises coming from the house. Angela is suspicious and she wants Jane to look into everything.

It is always a pleasure to read an excellent procedural and Listen to Me certainly fits that description. The procedural part of investigation into Sofia's murder is intricate and the clues are carefully followed. There are unpredictable twists and turns in both investigations and both offer surprising conclusions. Gerritsen effortlessly switches between the two story lines in Listen to Me, although, even though they are both compelling and complex, the truth is that at times Angela steals the show. She also provides levity at points in the narrative that allow some of the built up tension to be released.

As a long running series fans will know the characters, although there are a few surprises in character development presented. For those who have never read a Rizzoli & Isles novel, Listen to Me can be read as a standalone novel and will be just as enjoyable for you as it will be for long time readers of the series. This is an excellent addition to the series and it will encourage those new to the series to read some of the earlier outings of the duo.

Disclosure: My review copy was courtesy of Random House.
Posted by Lori L at 12:25 PM