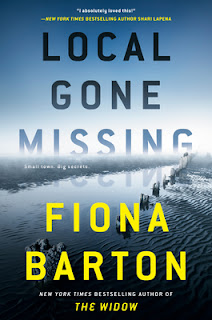 Housecleaner Dee Eastwood shows up to clean the caravan where Pauline and Charlie Perry are living while purportedly restoring the crumbling estate Tall Trees when it is discovered Charlie (73 years-old) has disappeared. Seventeen days earlier Charlie had visited his daughter Birdie in the residential care facility where she lives due to brain damage caused during a burglary twenty years earlier. Charlie is six months behind in paying for Birdie's care, but Pauline objects to spending money on her care. Charlie's disappearance occurs on the first night that a large musical festival is being held in Ebbing where two teens overdose on drugs.

Elise King is a detective who is on medical leave who observes all the rising tensions in her community. She also employees Dee, who sees and knows many secrets, but keeps he mouth closed. When a man disappears and the teens overdose on the first night of the festival, Elise starts her own investigation with assistance from her friend Ronnie. Due to what she has already discovered, her DCI then asks her to come back to work on the case in the Major Crimes team. Elise uncovers a whole lot of information and secrets swirling through Ebbing.

The complicated plot switches back and forth between characters and alternates between the present and days in the past leading up to the present day. At first the quick pace may be a bit of an information and character overload as a plethora of facts and names are quickly introduced into the plot, but stick with it and soon information, secrets, and people will start to sort themselves out and form a larger picture.

Elise is an appealing character and it is compelling when she starts looking into what is going on in Ebbing. The novel was more appealing once it takes a clear direction toward being a procedural. It presents us with a satisfying investigation as more evidence is uncovered and pieces of the puzzle are put together. There are many characters who have some relationship or information about Charlie and others. This results in plenty of clues and suspects provided along the way and numerous subplots that sometimes left me struggling to keep interested in the overall story. 3.5 rounded up.

Disclosure: My review copy was courtesy of the Penguin Publishing Group