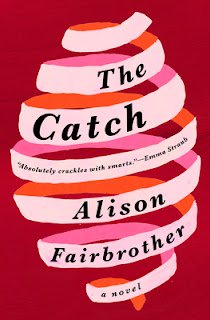 The Catch by Alison Fairbrother is a recommended domestic drama.

Ellie Adler, 24, is the oldest of her father's four children from three different marriages. James Adler, a poet, loves all of his children and Ellie has fond memories of the mixed family celebrating holidays at unique times with their father, for example, summer Christmas. When he suddenly dies from a heart attack days after she had visited for summer Thanksgiving, she is devastated. Ellie reads his famous poem, "The Catch," at his funeral. After this she learns he bequeathed specific items to his children in his will. She was expecting to get the baseball he kept on his desk, instead she is given a tie rack that means nothing to her and the baseball is given to someone she never heard of. This sets her on a quest to track this person down and find out who he is while also dealing with complications in her personal life.

The bulk of the plot consists of her tracking down someone because she wants what her father wanted to give to this man and her demanding more from her married 39 year-old boyfriend. Even giving her some grace due to her grief, Ellie's immaturity and ego-centrism becomes increasingly tiresome. I did appreciate the growth her character experienced in some areas but not so much in other ways. She does discover the reason for her father wanting her to have the tie rack. What is surprising is that she never heard the story surrounding the reason for it. She also learns some surprising information about her father.

If the majority of the novel simply consisted of Ellie finding out the truth behind the baseball and the reason for her father's bequeath to someone else, it would have made the story stronger. This search to uncover the truth is what compelled me to keep reading. Her demanding more from her affair with her 39 year-old married boyfriend was a big turn off for me and an unneeded distraction. Yet again I need to caution an author to keep their personal political/social views to themselves, which added nothing to the development of this novel. This diminishes and dates the novel while detracting from the narrative.

The Catch is a novel that starts out strong and then loses momentum along the way. The quality of the writing is quite good in this debut novel and despite the few hiccups along the way, it will be interesting to see what Fairbrother publishes next. 3.5 rounded down

Disclosure: My review copy was courtesy of Penguin Random House via NetGalley.