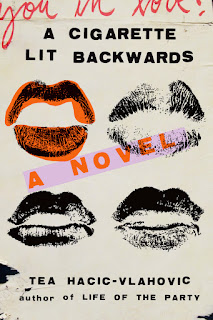 A Cigarette Lit Backwards by Tea Hacic-Vlahovic is a recommended coming-of-age novel set in the punk-rock scene of the early 2000s.

Kat lives in North Carolina and is desperately trying to fit in with the group that comprise the local punk scene. She's certainly a part of the group, but remains on the fringes. Her insecurities and longing to fit in and be accepted as part of a group, and not be seen as a poseur, has led to a series of poor choices and bad decisions. When she surprisingly gets back stage and has her picture taken by a journalist, her reputation as a groupie soars. This however, leads to even more bad choices and poor decisions.

This is a novel that will no doubt have an impact and elicit a visceral reaction for some readers. The characters are unlikable and they are definitely written to be that way. However, the writing felt very matter-of-fact and bare bones to me, which left me wanting more. My heart broke for Kat even though she clearly wouldn't care about that. All I could think about while reading this novel was that someone needed to care enough to talk to Kat and set her straight. This also makes me certain that I am not the target audience.

Disclosure: My review copy was courtesy of The Overlook Press.
Posted by Lori L at 1:46 AM