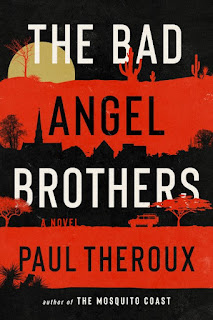 The Bad Angel Brothers by Paul Theroux is a highly recommended psychological drama.

Brothers Frank and Cal Belanger are complete opposites in this drama of sibling rivalry and betrayal. Cal's older brother Frank has always been the favorite child of his mother, which left Cal as his father's, who passed away young. As Frank went on to become a lawyer, Cal pursued his dream of prospecting for gold and other precious minerals around the world. Frank, who craved control and money above all else, took advantage of Cal, asking for loans and even appropriating Cal's stories and telling them as his own. Cal's dream was only to leave their New  England small town and his greatest mistake was coming back and not severing all contact with Frank.

The novel opens with Cal returning from a mining venture only to find his wife distant and seemingly too friendly with Frank. Then the narrative jumps back in time to when the brothers were younger and, after college, when Cal took off to look for gold. While Cal is only interested in making enough to get by and finds real joy in the search, Frank is envious of his wealth, asks for loans, and seriously looks for ways to scam his brother. After an incident in the desert where Cal saves another man, he is welcomed into a family where he feels wanted for the first time. At this Cal should have cut ties with Frank and his mother and disappeared.  But he didn't.

The plot goes on to cover Cal's prospecting and work in various locations, including the desert South West, Alaska, Colombian, and Zambia. Admittedly, this large portion of the novel will be engaging for those who enjoy geology and learning about different areas in the world. For some it will seem to be a bit too slow. But, as Cal is traveling for his work, he is also sharing more hints at the psychological campaign that Frank is waging. He is clearly scheming, manipulating, and planning some nefarious but legal downfall to afflict Cal.

The writing is excellent and the characters are finely drawn. Cal shares some of his own imperfections while also detailing those of Frank. There is a question that will arise continuously: why didn't Cal cut off all contact with Frank after college? If a sibling has shown they wish you ill, especially to this extent, why continue any relationship?

When you get close to the end of The Bad Angel Brothers, you will not be able to read and turn the pages fast enough while you are mentally telling Cal what to do. When he finally comes to the realization (that most readers will have reached much earlier) the novel is over. This is a novel that will stick with you, but also ends so abruptly that it will leave you wanting some closure.

Disclosure: My review copy was courtesy of HarperCollins.
Posted by Lori L at 1:49 AM