On the Rooftop by Margaret Wilkerson Sexton
9/6/22; 304 pages
HarperCollins 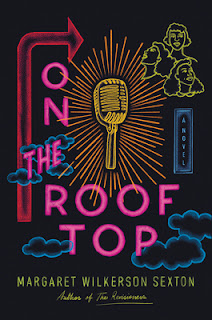 On the Rooftop by Margaret Wilkerson Sexton is a highly recommended historical fiction novel set in the 1950s.

In 1953 the changing Black San Francisco neighborhood, Vivian's three daughters, Ruth, Esther, and Chloe have been singing and dancing in harmony since they could speak. Vivian's husband has passed away, and she dreams of her three girls reaching stardom. On stage, the three girls are known as The Salvations. Now in their 20's, they are becoming well known, especially due to their weekly appearances at the Champagne Supper Club, and a talent manager has contacted Vivian hoping to help them reach the pinnacle of success. However, things are changing, both in the lives of the girls and the neighborhood.

The writing is a descriptive delight in this novel and it depicts both the good and the bad of the many events the family goes through. Chapters are from the point of view of Vivian, Ruth, Esther, or Chloe. Readers can follow Vivian's dreams for her girls and the plans the girls have for their own lives. Also detailed are the changes occurring in the neighborhood. Complex relationships reign in this novel, and they are what makes the narrative interesting, with the relationship between the mother and her daughters a main depiction.

The descriptions of the mother and sisters are all clearly delineated and each character represents an individual with dreams of her own. The experiences of the sisters are removed from those pf the mother, yet the mother's experiences ultimately effect the daughters too, although with  a modicum of restraint.

Normally historical fiction isn't a choice of mine, but this novel represents an excellent choice for anyone who understands the dreams a mother may have for her children and then the alternate paths the children take. On the Rooftop by Margaret Wilkerson Sexton was inspired by Fiddler on the Roof, and that comparison is apropos.

Disclosure: My review copy was courtesy of HarperCollins via NetGalley.
Posted by Lori L at 1:29 AM