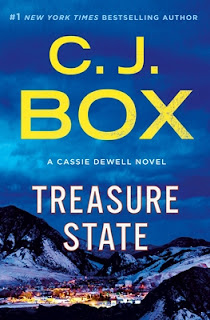 Cassie has two investigations underway in this complex, entertaining novel. The first one is finding the charming man who conned a wealthy widow out of millions of dollars. She called Cassie to take on the case after the Florida PI she hired disappeared while tracking down a suspect to Anaconda, Montana. Cassie soon learns that the case is bigger than she originally thought.

The second case is an unusual one. A poem is written by an anonymous author giving clues how to find a buried treasure worth millions and the search is on by treasure hunters. Cassie, however, is hired by the anonymous man who hid the gold. He wants to test his security by having her try to find him. If she tracks him down, he’ll pay her a bonus of $25,000.

Both of the investigations are complex, interesting, and full of intrigue, as well as surprises. This is the sixth novel featuring Cassie Dewell, but it works well as a stand alone. I need to go back and read the others in the series.

Cassie is a wonderful character. She's a smart, strong, intuitive single mother. She's also a realistic character who is 40 something, worries about her weight, and has to wear reading glasses. Cassie works hard and is very perceptive. I loved the interaction with her family, however brief it was here. The other characters were also interesting and memorable.

Box does an excellent job plotting the novel and setting a fast pace while Cassie follows clues in both cases. The narrative is mainly told through Cassie's point-of-view, although there are some alternating viewpoints. The chapters are short and to the point, keeping things moving along quickly. The chapter titles help the reader follow the action and the timeline of events. The final denouement is perfect. I highly enjoyed this whole novel!


Disclosure: My review copy was courtesy of St. Martin's Press via NetGalley.
Posted by Lori L at 11:20 PM