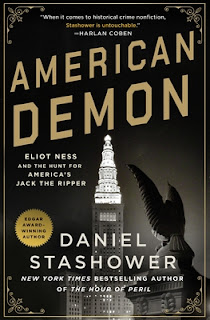 American Demon: Eliot Ness and the Hunt for America's Jack the Ripper by Daniel Stashower is a highly recommended account of the life of Eliot Ness.

In Cleveland during the Great Depression over a period of four years, starting on September 5th, 1934,  the dismembered remains of twelve bodies were discovered. The killer became known as the Cleveland’s Torso Killer, or the Mad Butcher of Kingsbury Run. This case was handled by Eliot Ness, the new director of public safety. Ness came to Cleveland after he and the Untouchables ended Al Capone’s bootlegging empire. For better or worse, this case redefined Ness's career and tried to clean up the corruption in the police force.

As it cover his time in Cleveland and his involvement in the investigation into the case, American Demon acts as a biography of Ness's life . Although he didn't catch the killer, he did achieve cleaning up corruption in Cleveland. Stashower portrays Ness realistically showing his strength and flaws. He also credits those who helped solved the case, which was beyond the skills Ness had.

This is an interesting, well written account about Eliot Ness, covering his life in Cleveland. As a historical true crime novel, it covers the investigation into the serial killer as well as many other occurrences during this time. Part of the interest is in how an investigation was covered in the past and the bizarre details of the case.  Notes, a Bibliography, and Index are included.

Disclosure: My review copy was courtesy of Minotaur Books via NetGalley.
Posted by Lori L at 12:49 AM