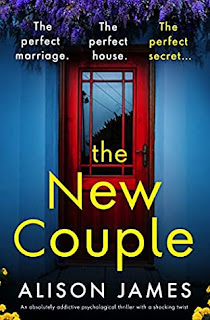 When a renovated house in an upscale neighborhood is offered as a prize in a charity lottery, it is won by Stephanie and Richard Hamlin. The neighborhood is curious to meet the new residents, so when they are moving in along with their young daughter Poppy, and neighbor Jane Headley swiftly drops by to welcome them to the neighborhood. Jane finds their reactions a bit off-putting and odd, but Fergus, her husband, is quick to point out that they just moved in. When Stephanie stops by the next day and asks if Jane can babysit Poppy because she has to go somewhere, Jane agrees, but this only initiates even more curiosity about the new family and she starts to look into their backgrounds.

There is no question that the initial chapter indicating someone is chained up in a basement will immediately grab your attention. Then, as Jane begins snooping into her new neighbors, things slow down a bit but readers will also have their suspicions rise that something is amiss. Then the narrative goes back and totally twists things up. The story is divided into four parts. The first part is basically told through Jane's observations, it then jumps back in time and switches to someone else's experiences, and eventually unfolds through three narrators.

The plot is engaging even while none of the characters are particularly likable. The key to enjoying the novel is getting the complete picture through all three narrators. You'll have to accept really nosy neighbors, as well as some great leaps of disbelief, but it will be worth it to fully experience this fast paced, fun, and entertaining read.

Disclosure: My review copy was courtesy of Bookouture via NetGalley.
Posted by Lori L at 1:07 AM