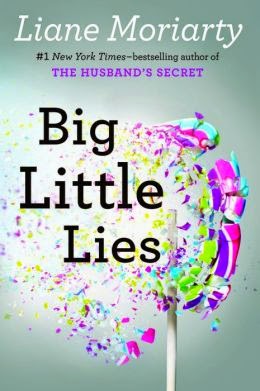 A murder… . . . a tragic accident… . . . or just parents behaving badly?
What’s indisputable is that someone is dead.
But who did what? Big Little Lies follows three women, each at a crossroads:
Madeline is a force to be reckoned with. She’s funny and biting, passionate, she remembers everything and forgives no one. Her ex-husband and his yogi new wife have moved into her beloved beachside community, and their daughter is in the same kindergarten class as Madeline’s youngest (how is this possible?). And to top it all off, Madeline’s teenage daughter seems to be choosing Madeline’s ex-husband over her. (How. Is. This. Possible?).
Celeste is the kind of beautiful woman who makes the world stop and stare. While she may seem a bit flustered at times, who wouldn’t be, with those rambunctious twin boys? Now that the boys are starting school, Celeste and her husband look set to become the king and queen of the school parent body. But royalty often comes at a price, and Celeste is grappling with how much more she is willing to pay.
New to town, single mom Jane is so young that another mother mistakes her for the nanny. Jane is sad beyond her years and harbors secret doubts about her son. But why? While Madeline and Celeste soon take Jane under their wing, none of them realizes how the arrival of Jane and her inscrutable little boy will affect them all. Big Little Lies is a brilliant take on ex-husbands and second wives, mothers and daughters, schoolyard scandal, and the dangerous little lies we tell ourselves just to survive.

Big Little Lies by Liane Moriarty is a brilliant, very highly recommended novel that closely follows the lives of three woman who have kindergarteners in Pirriwee Public School. This is both a murder mystery and a comedy.

Opening with the observations of Mrs. Ponder, an older woman who lives by the school, we learn about the drunken chaos on the night of the school's annual Trivia Night fundraiser where parents are dressed in either Audrey Hepburn or Elvis costumes and someone turns up dead. The novel then jumps back to the six months preceding that fateful night. Interspersed in the narrative are snippets from interviews of various parents about all the events/gossip leading up to the death.  Who was the victim and could it have been a murder?

The main narrative follows three different women as everyone meets at Kindergarten orientation.

Madeline has just turned forty. Her youngest Chloe is the kindergartener. She is struggling with her ex and his wife also having a kindergartener at the same school. And why on earth would her oldest daughter want to go live with her father when he abandoned them right after she was born? Madeline is charming, vibrant, outspoken, and willing to take on the Blond Bobs who run the school.

Celeste is the mother of twins, Max and Josh, who are starting kindergarten. Celeste is a beautiful woman married to an incredibly wealthy man but she's been hiding some dark secrets about her marriage for years.

Jane is a young, single mother whose son Ziggy is starting Kindergarten. Madeline befriends Jane on orientation day, the same day Jane's son Ziggy is accused of choking another child and, later, bullying. The mother and her sycophant friend immediately make take an adversarial stand against Ziggy, trying to rally the school against the five year old boy. Madeline takes exception to their misguided, but strident, accusations.

The comments from various parents are interspersed throughout the story are like a Greek Chorus of defenders and accusers. Some of their perceptions and alliances are clearly drawn, but there is more than one controversy going on in the school. The comments cover such a wide range of opinions and judgments that it is a challenge to discern exactly who is commenting on what event that went on that night. Clearly, by some of the comments lines have been drawn and some parents are hard pressed to do more than pass along gossip and half-truths.

As I said, this is a brilliant novel. While covering some difficult social issues, Moriarty has managed to make Big Little Lies an entertaining, clever, humorous, dramatic novel that ultimately encompasses some acute discernment into human nature. Along the way, even when the subject matter may be hard. Big Little Lies is very engaging and will keep your attention to the very satisfying conclusion. The three main characters are all likeable and you want to help them overcome their issues. You will care about these women.

I know Big Little Lies will be on my best books of the year list. It is that good. (While previously mentioned Cop Town was another top read of the summer, it is much darker and grittier than Big Little Lies.) Liane Moriarty has just made a new fan.


Disclosure: My Kindle edition was courtesy of Amy Einhorn Books for review purposes.