Don't Worry about the Kids

Don't Worry about the Kids by Jay Neugeboren 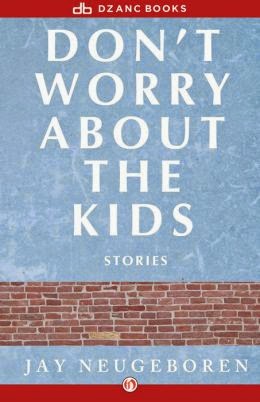 When Jay Neugeboren's first book of stories was published a quarter century ago, it was hailed by one critic as "the most penetrating and superbly written look at adolescence since J. D. Salinger's Catcher in the Rye." Since then, Neugeboren has published more than fifty new stories, many of which have won prizes and/or been chosen for anthologies. This volume brings together fifteen examples of his best work--stories that are by turns violent and tender, lyric and stark, terrifying and playful, funny and surreal.
Although the voices and settings of these tales are diverse, their central concerns remain constant. Neugeboren explores the precarious nature of family life and those elements--madness, betrayal, loss--that often shape and threaten it. He writes about the mysterious, sad, surprising, and sometimes beautiful ways in which love expresses itself. He reveals how our choices, large and small, inform and define our lives.
Whether writing about a black American musician in Paris or a documentary filmmaker in Maine, about a boy grieving for the death of his father or parents for the loss of their children, about divorce or city life or basketball or mental illness, Neugeboren brings to his craft a profound knowledge of the heart's imperatives.
This volume is the mature, seasoned work of one of our finest writers.

My Thoughts:
Don't Worry about the Kids by Jay Neugeboren is a highly recommended collection of 15 short stories originally published in 1997 and now being re-released as an eBook by Dzanc Books/Open Road Integrated Media.

While the protagonist of these stories can vary widely, often they are divorced fathers and/or Jewish men. In several the men have a mentally ill brother, which ties into author Jay Neugeboren's memoir,  Imagining Robert: My Brother, Madness, And Survival. There are a few exceptions to Neugeboren's common themes, such as in "Connorsville, Virginia" where the story is told by a black man.

All of the stories are well written and will hold your attention to the end. Not being a Jewish divorced male from Brooklyn or even remotely interested in sports, some of the stories were a stretch for me. I also felt that many of the female characters were stereotypes and never felt like real people. All in all, though, this is a fine collection and it should please fans of the short story.

Don’t Worry about the Kids - a divorced father talks to the court appointed mediator in a bid to get more time with his kids; an excellent story and perhaps my favorite
Workers to Attention Please - a man fights anti-American protestors with the real reason explained later
The St. Dominick’s Game - a young man is giving it his all for the coach, while concerned about his mother's suitor
Romeo and Julio - an imaginative young man with a mentally ill brother thinks he's found his Juliette
Leaving Brooklyn - a young woman is reflecting on her childhood and life
How I Became an Orphan in 1947 - a car crash results in a mother giving up her child
Minor Sixths, Diminished Sevenths - young man living in Paris reflects on when he and his brother were in a band in the 60's
Fixer’s Home - A former athlete was paid off to fix games
Department of Athletics - a 17 year old young man is biding his time while waiting to hear from the right college
Connorsville, Virginia -  a young black man working for a difficult white sheriff
The Year Between - a couple take a year away from each other
Your Child Has Been Towed - a man in Brooklyn ponders his relationship with the library
What Is the Good Life? - a CIA agent sends his daughter to her death
In Memory of Jane Fogarty - a psychiatrist is named as the beneficiary to a patient's insurance policy but his relatives want the money
Tolstoy in Maine -  a filmmaker hiding in Maine has a fling with a woman who disappears, and then her side of the story is told

Disclosure: My Kindle edition was courtesy of Dzanc Books via Netgalley for review purposes.
Posted by Lori L at 12:26 PM