Sing in the Morning, Cry at Night

Sing in the Morning, Cry at Night by Barbara J. Taylor 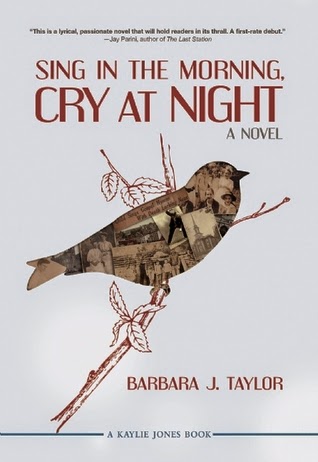 
Almost everyone in town blames eight-year-old Violet Morgan for the death of her nine-year-old sister, Daisy. Sing in the Morning, Cry at Night opens on September 4, 1913, two months after the Fourth of July tragedy. Owen, the girls' father, "turns to drink" and abandons his family. Their mother Grace falls victim to the seductive powers of Grief, an imagined figure who has seduced her off-and-on since childhood. Violet forms an unlikely friendship with Stanley Adamski, a motherless outcast who works in the mines as a breaker boy. During an unexpected blizzard, Grace goes into premature labor at home and is forced to rely on Violet, while Owen is "off being saved" at a Billy Sunday Revival. Inspired by a haunting family story, Sing in the Morning, Cry at Night blends real life incidents with fiction to show how grace can be found in the midst of tragedy.

The Morgan family is composed of Owen, the father, Grace, the mother and their two girls, nine year old Daisy and 8 year old Violet. On July 4, 1913, there is a horrible accident and Daisy is left mortally burned. As Daisy slowly dies over three days, Violet plays the piano  for her while Daisy sings hymns. The whole town blames Violet for the death of her sister and neither parent is able to set aside their own grief to comfort or console her.

Grace Morgan is already emotionally fragile and the death of her daughter pushes her into a severe depression. She has personified Grief as a real person since the death of her father when she was a child, and with each death and each miscarriage she has had, Grief has grown stronger. Daisy's death pushes Grace to the edge of the abyss and she is totally emotionally crippled.

Owen also takes Daisy's death hard and can't cope with Grace's depression at the same time. He turns to drinking. After he returns home drunk very late one night, he has an explosive altercation with Grace. He then leaves his family, choosing to live in a rented room above the gin mill.

In this tangle emotional miasma, Violet is left to try and deal with her grief on her own, even while the adults around her holds her responsible for the death of her sister and seemingly even  the disintegration of her family. If not for her new friend, Stanley whom with she plays hooky from school with to fish and explore, Violet would have no support system. When an older widow befriends the two, they both get a modicum of the mothering they both need.

During this same time period the famed evangelist Billy Sunday is coming to Scranton for a huge revival meeting. The town is building a temple to prepare for the special event and attendance is expected to be high.

As a sort of Greek chorus in the background, Taylor includes comments from the church women in sections between several chapters. Preceded by some helpful homemaking advice from the time period, the chorus of comments that follow are from the widows and spinsters who are always there, doing things for the church and keeping track of everyone's business. Perhaps they mean well, bless their hearts, but perhaps they are spreading tales and making things worse.

This is an incredibly well written novel that has the kind of historical accuracy and details that make reading historical novels a treasure. It is hard to believe based on the description, but this is also a novel of hope, grace, survival and even joy. Picked as a best summer book for 2014 by Publisher's Weekly, Barbara J. Taylor's Sing in the Morning, Cry at Night is not to be missed.

Disclosure: My Kindle edition was courtesy of Akashic Book for review purposes.
Posted by Lori L at 5:00 AM