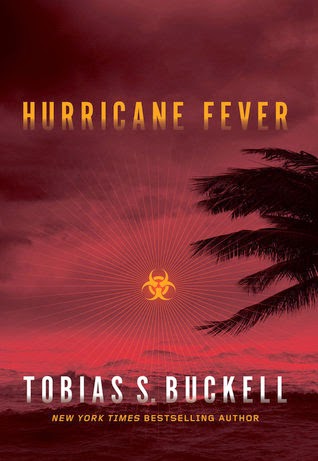 Prudence “Roo” Jones never thought he’d have a family to look after—until suddenly he found himself taking care of his orphaned teenage nephew. Roo, a former Caribbean Intelligence operative, spends his downtime on his catamaran dodging the punishing hurricanes that are the new norm in the Caribbean. Roo enjoys the simple calm of his new life—until an unexpected package from a murdered fellow spy shows up. Suddenly Roo is thrown into the center of the biggest storm of all.
Using his wits—and some of the more violent tricks of his former trade—Roo begins to unravel the mystery that got his friend killed. When a polished and cunning woman claiming to be murdered spy’s sister appears, the two find themselves caught up in a global conspiracy with a weapon that could change the face of the world forever.
In Hurricane Fever, New York Times bestselling author Tobias Buckell (Arctic Rising, Halo: The Cole Protocol) has crafted a kinetic technothriller perfect for fans of action-packed espionage within a smartly drawn geo-political landscape. Roo is an anti–James Bond for a new generation.

My Thoughts:
Hurricane Fever by Tobias S. Buckell is a very highly recommended, fast paced thriller that will leave you feeling like you have been through a hurricane of action.

Dreadlocked Prudence “Roo” Jones, a retired operative from the Caribbean Intelligence Group, is trying to live a quiet, retiring life on his catamaran, Spitfire II, while caring for his teenage nephew and watching out for hurricanes. Roo is tracking an approaching hurricane and preparing to sail to a safe harbor when he gets a message from Zee, a former colleague and friend. Zee simply says if Roo gets his message, Zee is dead and Roo needs to extract revenge. Zee's message sends Roo out on a dangerous mission where the approaching storm may not be a destructive as the people now after him. And is the woman, Kit, who claims to be Zee's sister really his sister or could she have other motives for reaching out to Roo?

Set in the Caribbean in the near future, this is a fast paced thrilled that moves with lightning speed from one action packed encounter to another. I love what Publisher's Weekly said in their review rating the climax as "one white cat shy of a Bond movie" - a very apt description. This is a perfect summer read since the plot moves along so swiftly it holds your attention and there are no little niggling details to remember as you race to the dramatic climax. (And, not to spoil any plot points, but it showcases two of my favorite subjects: weather and bio-warfare.)

Buckell knows how to write an engrossing thriller in an unequivocal style: clear, concise and captivating while still managing to insert a whole lot of action and interesting plot developments.

There is violence (just like in a Bond movie) but Buckell doesn't revel in showcasing the gore or making it excessive. This is a fun, entertaining read that shouldn't disappoint readers.


Disclosure: My Kindle edition was courtesy of Tom Doherty Associates via Netgalley for review purposes.
Posted by Lori L at 12:07 PM