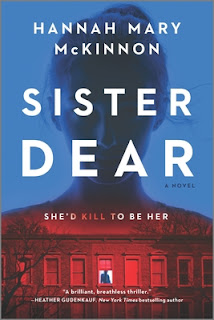 Eleanor Hardwicke’s beloved father dies leaving her alone in the world. Her mother, long divorced from her father, is a wretched woman who has always favored her sister and relished abusing Eleanor emotionally. Even worse than losing her father is learning that he wasn't her biological father. She was the product of an affair and before he died her father left the name of her biological father. Eleanor researches him, discovers they both live in Portland, Maine. He is married with a glamorous wife and they have a beautiful daughter, Victoria. Eleanor meets with him, learning he paid her mother off to leave and he wants nothing to do with her. Eleanor sets her sights on meeting her half-sister. She manages to insert herself into Victoria's life and becomes part of her world.

The narrative is told from Eleanor's point-of-view and you know right from the start that something is going to go terribly wrong. A whole lot goes wrong for Eleanor right away, and there is some sympathy for her at the beginning and you will hope she can pull herself together. You will hope she gives her neighbor Lewis a chance, but you will also wonder why he seems too good to be real. You'll wonder why she hasn't smartened up about her mother and sister. Then her mental state seems to become more unstable as she constantly berates herself, even as she is trying to get close to her newly discovered half-sister.  After that she does start to grate on your nerves as the plot takes a turn to the unbelievable. Victoria is too good to be real.

It is more chick lit than psychological thriller and I didn't care for any of the characters by the end. The ending itself is a sudden twisty reveal, but at that point you are already anticipating what happens so it's not shocking. I admittedly had to force myself to continue reading this after the halfway point, but it did end up holding my attention and I finished it, so kudos for that.