The Motion of the Body Through Space 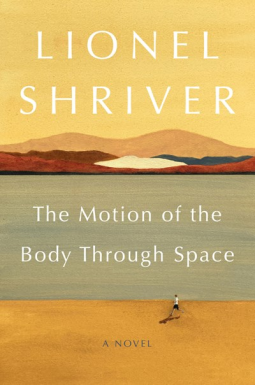 The Motion of the Body Through Space by Lionel Shriver
HarperCollins: 5/19/20
eBook review copy; 352 pages

The Motion of the Body Through Space by Lionel Shriver is a very highly recommended novel confronting exercise obsession, aging, and the expectations to conform to ever changing arbitrary  societal views.


Serenata Terpsichore and Remington Alabaster have been married for 32 years and have two children that have been a disappointment. They recently moved to Hudson, N.Y., after Reminton lost his DOT civil engineering job in Albany. Much to Serenata's surprise, Remington, at age 64, decides to take up running and plans to enter a marathon. Serenata, 60, has always been the runner, the one with an obsessive fitness routine in the family but, after years of use, her knees are now arthritic, ruined, and she's looking at joint replacement surgery. Remington embraces his new exercise routine with a cult-like fanaticism that eventually results in his hiring a trainer named Bambi to help him train for the Lake Placid MettleMan Triathlon. Bambi treats Serenata with disdain - and the feeling is very mutual.

We should probably get one fact out in the open right at the start. I admire Lionel Shriver for her incredible talent and for her stating her unabashed opinion on any and all of the absurd cultural phenomena raging about us. For me she was, as usual, right on topic, observant, clever, and fearless while tackling the opinions that are often suppressed or labeled with some derogatory term now. She is mainly focused on aging and the current cult of exercise, but she also covers long-term relationships, wokeness, offense culture, cultural misappropriation, identity politics, the Me-Too movement, marginalized people, virtue signaling, group-think, and the victim-hood culture.

Serenata and Remington are both well-developed characters that come to life in this novel. No, neither of them is depicted as a saint, but they are definitely realistic individuals with all their faults and foibles clearly on display. Both are succinct and outspoken with each other regarding their opinions. Although my knees are fine, I understand hitting the road block that aging can set before you, so it was clear that they were at odds with their approach to facing it. After exercising on her own with her own routines for years, Serenata had little choice but to accept a more sedentary life, while Remington obsessively took on a monumentous goal that was at odds with her current situation.

The writing is incredible, both precise and flawless. Shriver always uses the absolutely perfect word to describe what she means. She also manages to capture the absurdity of situations and encounters with humor and sarcasm mixed in to the reality. All of the characters may be slightly exaggerated but this is much better to compare and contrast them. They also serve as the perfect vehicle for Shivers prose and opinions. This is an absolutely wonderful novel that could spark some intense discussions at any book club.
I personally saved many quotes from The Motion of the Body Through Space, but want to mention a couple that hit home for me:
"I think what grates about these abruptly ubiquitous expressions.... Meaning, suddenly everyone says it.... It’s just, people throwing around fashionable lingo think they’re so hip and imaginative. But you can’t be hip and imaginative. You can be unhip and imaginative, or hip and conformist."
"She was too content by herself, and had sometimes wondered if not getting lonely was a shortcoming."
"I dislike her personally. As an individual. Is that possible anymore? Is it legal to harbor animosity toward a specific person who just happens to belong to a 'marginalized community'?"
"What has not changed - what has always been the case with human beings - is that 'feelings' are no more factually sacrosanct than any other form of testimony. So you can 'argue with what people feel.' Because people lie about what they feel. They exaggerate what they feel. They describe what they feel poorly, sometimes out of sheer verbal inadequacy. They mistake one feeling for another. They often have no idea what they feel. They will sometimes mischaracterize their emotions with an eye to an ulterior motive - "