The End of the Day

The End of the Day by Bill Clegg 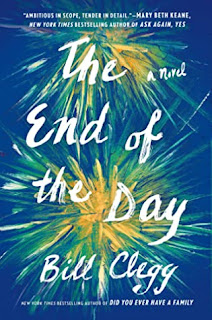 
The End of the Day by Bill Clegg is a highly recommended domestic drama wrapped around a mystery.

Rotating chapters from the past and present tell the story of multiple characters, Dana, Jackie, Lupita, Alice, and Hap, which, when followed, explain the whole story and a mystery some didn't even know existed. Dana Goss, heir of her wealthy family's Connecticut estate, Edgeweather, is beginning to show the onset of Alzheimer’s. She has her driver take from NYC to the home of her childhood best friend, Jackie, who after fifty years of silence still won't even open the door to see Dana. Dana leaves Jackie a briefcase stuffed full of papers and then goes to Edgewater for the first time in thirty years. Lupita, currently living in Hawaii and running a taxi company, is the daughter of the former maid and caretaker for the Goss family. She is around the same age as Dana and Jackie. Alice, of Bethlehem, Pennsylvania, is the aunt, benefactor, and friend of Dana Goss. Alice's son and wife just had a baby - and have both disappeared, leaving the infant with her. Hap is the son of Alice who finds his father collapsed at a hotel and is now sitting at his deathbed instead of helping his wife with their newborn.

Chapters are told from the past and present, rotating through parts of each character's story until all the connections are made between the past and the present. Dana is the only character who knows all the connections - for now. The long-hidden secrets will reveal how the choices we make will become our legacy in the future and how those secrets will continue to affect the lives of everyone involved. This is truly a novel about the "complicated bonds and breaking points of friendship, the corrosive forces of secrets, the heartbeat of longing, and the redemption found in forgiveness."

The End of the Day is a beautifully written character driven novel. This is really more of a character study involving multiple characters, as well as a slow meandering path to the connections their intertwined lives established between them. The prose is melancholic, atmospheric, full of keen observations as Clegg slowly gives us more clues to the past, the choices that were made, and the secret history that connect the characters. I did feel that the writing was stronger in the first part of the novel and the characters melancholy and despair make it difficult to relate to them or deeply care about them.