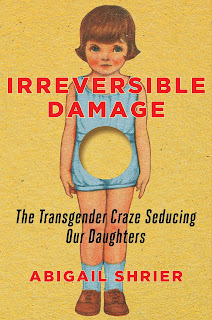 Irreversible Damage: The Transgender Craze Seducing Our Daughters by Abigail Shrier is a very highly recommended objective, balanced examination and exploration of the current and dramatic increase of the number of teenage girls identifying as transgender. According to the CDC, currently over 2% of high school students, overwhelmingly girls, identify as transgender when historically gender dysphoria (severe discomfort with one's biological sex) was .01% of the population and almost exclusively male. Gender dysphoria usually emerges early in childhood. Today, however there is an overwhelming surge of adolescent girls claiming to have gender dysphoria and are self-identifying as transgender.

Puberty is hard on girls. (I know; I understand.) Adding to the stress of your changing body is the cruelty and criticism girls inflict upon themselves and others. They are in genuine pain. As Shrier points out this transgender movement in young girls is a new social contagion. We know it is a social contagion because it is so statistically new and overwhelmingly high in numbers. Often this is concentrated among a group of peers or around a specific community or school system. Girls are learning about this through school programs, but especially through social media influencers. We all know that social media can make everyone anxious and sad, however, it affects adolescent girls are the hardest. "[A]dolescent girls, who historically faced life’s challenges in pairs and groups, are now more likely to face them alone." These are girls who are isolated from other people and turn overwhelmingly to social media for their support and information. This gives them a community, acceptance, and the opportunity to escape into a victim identity, which gives them support immediately. Being transgender is one of the few you can choose.

When talking to a counselor or therapist, the young girls often are encourage to quickly start puberty blockers, or testosterone, and look toward top surgery (double mastectomy), all of which inflict irreversible damage on their bodies. It seems appropriate (to me) to have a requirement that young people wait until their brains mature before being encouraged to make such life changing decisions. "The prefrontal cortex, believed to hold the seat of self-regulation, typically does not complete development until age 25." Certainly you can live as a man and later, after age 25-28 once your brain has reached maturity, you can look into hormones or surgery. Shrier makes a good point that this transgender craze may partially be the result of over-parented kids desperate to stake out territory for rebellion.

"According to Dr. Zucker, the mere fact that patients may have fixated on gender as a source of their problems does not mean that that they are right or that transitioning will alleviate their distress. "I said to this kid, ‘I don’t care if you have a male brain or a female brain. This is how you’re feeling currently and we need to figure out why you’re feeling this way and what is the best way to help you lose this dysphoria.’ " It is worth asking whether a standard guided less by biology than by political correctness is in the best interest of patients. Allow their brains to mature, pass the age of rebellion, before making life changing decisions that will affect their health. "Teens and tweens today are everywhere pressed to locate themselves on a gender spectrum and within a sexuality taxonomy - long before they have finished the sexual development that would otherwise guide discovery of who they are or what they desire."

Shrier talked to trans people, parents, influencers, doctors, academics, and professionals on both sides of the issue in this informative, well written and presented examination of this current trend. This is not a transphobic book, unless information is something to be feared. She ended the book with seven rules that were wonderful for reasons beyond the topic at hand: 1. Don’t Get Your Kid a Smartphone 2. Don’t Relinquish Your Authority as the Parent 3. Don’t Support Gender Ideology in Your Child’s Education 4. Reintroduce Privacy into the Home - Quit the habit of sharing every part of your lives (and theirs) on the internet. 5. Consider Big Steps to Separate Your Daughter from Harm 6. Stop Pathologizing Girlhood 7. Don’t be Afraid to Admit: It’s Wonderful to Be a Girl.


I totally agree with this closing remark from Shrier because it seems that being female has lost favor with the broader culture and there is a war against it: "But for Pete’s sake, whatever type of women young girls become, they should all listen to feminists of a prior era and stop taking sex stereotypes seriously. A young woman can be an astronaut or a nurse; a girl can play with trucks or with dolls. And she may find herself attracted to men or to other women. None of that makes her any less of a girl or any less suited to womanhood."