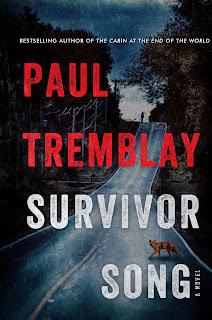 Survivor Song by Paul Tremblay is a highly recommended tale of a virus and terror that, at times veers eerily close to today's headlines.

"CNN’s panicked headlines and live-stream updates (including bloody images from overnight riots and looting of a shopping plaza in the affluent suburb of Wellesley) are alarming, overwhelming..."

Massachusetts has been overrun by an insidious rabies-like virus that is spread by saliva. Infected mammals (human and animals) spread the disease through biting. It is not a blood-borne virus. This strain has an increased virulence and is exhibiting a greatly shortened incubation period - just an hour after the bite. Once you are bitten, the virus is quickly spreading to the brain. Once it moves into the brain, the infected are driven to bite as many people as possible before they die. To try to limit its spread, the commonwealth is under quarantine and curfew. But society is breaking down and the government's emergency protocols are faltering.

Natalie (Nats) Larsen, who’s eight months pregnant, and her husband Paul, have their home broken into and are attacked and bitten by an infected man. The attacker kills Paul. Nats has one bite, on her arm. She immediately contacts her pediatrician best friend, Ramola (Rams) Sherman. Rams attempts to get Nats to a hospital for a vaccine before it’s too late, soon it becomes clear that Rams and Nats are really fighting to save Nat's unborn child.

Survivor Song is truly a compelling novel that is hard to put down. It immediately grabs your attention. Part of this could be due to the current quarantine and mask wearing while simultaneously rioting and societal unrest is rampant. It's as if your mind says, "Of course there will be a zombie rabies outbreak now to go along with the riots and Rona." The current situation actually makes this seem plausible. The other compelling part is the character development of Nats and Ramola. They are both well-developed, dynamic, and engaging. In the first part of the novel we know Nat's thoughts. Then in the second we are following their frantic search for medical help for Nats and we are privy to Ram's thoughts, while alternating chapters are transcripts of Nat's recording messages to her unborn child.

There were a few niggling details that bothered me and, of course, a back handed political treatise is included. Life is stressful enough right now without tying a rabies/zombie outbreak to any current political situation. As the opening says, and it applies to real life today: "The heat will be blamed for the outbreak. There will be scores of other villains, some heroes too. It will be years before the virus’s full phylogenetic tree is mapped, and even then, there will continue to be doubters, naysayers, and the most cynical political opportunists. The truth will go unheeded by some, as it invariably does."

Disclosure: My review copy was courtesy of HarperCollins.
Posted by Lori L at 1:49 PM