The Lost Girls of Devon

The Lost Girls of Devon by Barbara O'Neal 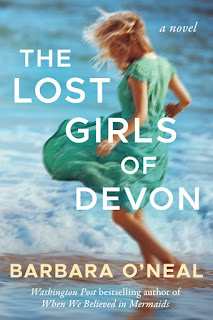 The Lost Girls of Devon by Barbara O'Neal is a recommended "story of four generations of women grappling with family betrayals and long-buried secrets."

In the village of Axestowe in Devon, England, mystery writer Lillian Fairchild is observing some activity that makes her uneasy. She may be near 90, but she knows what she's seeing. Adding to her concern is the fact that Diana, her nurse, caretaker, and the childhood friend of her granddaughter Zoe, has suddenly gone missing. When Zoe learns this, she and her 15 year-old daughter Isabel, travel from Santa Fe, New Mexico, to England to help. Complicating matters is that Poppy, Zoe's estranged mother, is living in the village and has reestablished a relationship with Lillian, but Zoe remains firm in her refusal to have anything to do with Poppy.

The lives of these four women are also complicated. Lillian is slowing down, showing signs of dementia, and needs a caregiver. Poppy, who left Zoe with Lillian when she was seven, is trying to reestablish connections, but Zoe won't talk to her and she's never met Isabel. Zoe is recently divorced, had been feuding with Diana, and is concerned about Isabel. Isabel has suffered some unnamed trauma at school and demanded to fish the school year learning from home.

The novel is very descriptive. There are several lovely descriptions of nature, while at the same time there are almost too many mentions of everyone's hair color and curls. The novel is also very slow to start. Part of the slow start is all the backstory that O'Neal needs to provide for the four generations of Fairchild women. All this is front loaded rather than being integrated into the plot while some plot advancement takes place. Zoe and Isabel supposedly fly to England to help look for Diana, but any action in that search seems secondary and perfunctory. I truly wish either the action/suspense part of the plot picked up the pace sooner OR it was just a novel about the complicated relationship between the Fairchild generations.

The characters are well-developed. They all struggle with relationships, but Zoe takes the most getting used to among them. Her history of holding grudges if anything has to do with her mother, Poppy, can be tiresome. Zoe has never forgiven her mother and her feud with Diana was because she befriended Poppy - that kind of controlling behavior would be hard to tolerate in any friend. I can understand a reluctance to trust or become close to Poppy because her behavior was unconscionable, but once you are in your forties, you should be able to acquiesce that a friend has the right to befriend whomever they chose. Poppy does require some tolerance as a character also. She is not beyond reproach, but she is trying to help young women now.


Disclosure: My review copy was courtesy of Lake Union Publishing.
Posted by Lori L at 1:27 PM