The Unidentified by Colin Dickey 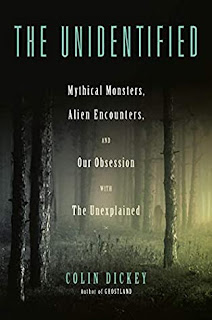 
The Unidentified: Mythical Monsters, Alien Encounters, and Our Obsession with the Unexplained by Colin Dickey is a highly recommended look at the followers of cryptozoology, UFO-ology, and other pseudoscientific fields.

In the past few years there has been an increasing number of people who believe in fringe topics like Atlantis, or cryptids (Bigfoot, the Loch Ness Monster, etc.), or UFOs, or ancient aliens. It seems that the more rational, scientific explanations are readily available to us, the more some of us embrace unsubstantiated things and fringe beliefs. We like the idea of strange creatures, ancient races, and aliens. They are akin to the unknown on maps labeled "here be monsters" as a notation to say "we don't know what scary things may be here." Who doesn't like to hear stories about Bigfoot or Lemurians or the great Kentucky Meat Shower or alien abductions or the New Jersey Devil. I vividly remember being riveted by the whole aliens draining the blood from cows in the 70's.

Dickey discusses many of the beliefs and visits many sites where many of the stories proliferate or originated and examines how these stories and myths take hold of our imagination and have us chanting "I want to believe" as we watch old X-Files episodes. (Okay, he also takes some of the fun out of it.) Certainly he covers both the modern, scientific investigations and understandings of various beliefs and contrasts them with the historical beliefs. Some of the followers of mystical phenomena are obviously still believers, like those looking for Lemurians on Mt. Shasta. Dickey does explain as well as possible why people still believe and why this belief may be on the rise.

This is a well written sociological examination of a fascinating topic, but it does lack some of the entertainment factor that makes an examination of these topics just plain fun. As he wrote, "The only worthwhile way to investigate any of this phenomenon, it seems, is to be aware of one’s biases and strive to eliminate them. To be free of a preconceived certainty, to be willing to admit the unexplained without that automatic obsession to explain it. The goal of this book has been to trace how two different, but related, shocks hit the industrialized world in the nineteenth century, causing a rift in how we understood it, and how a number of fringe beliefs emerged from that rift." Dickey also quietly slips his take on current politics into a few of the discussions, which was not necessary.

Disclosure: My review copy was courtesy of Penguin Random House.
Posted by Lori L at 2:30 PM