The Cold Vanish: Seeking the Missing in North America's Wildlands by Jon Billman 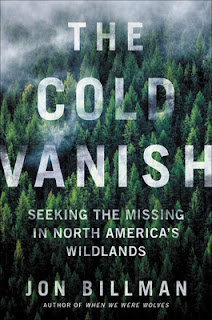 
The Cold Vanish: Seeking the Missing in North America's Wildlands by Jon Billman is a very highly recommended look at a small percent of the people who vanish in the wilderness, with a special focus on Jacob Gray's disappearance in Olympic National Park.

Jon Billman, an author and journalist, has researched and wrote about other disappearances when he learned about the story of Jacob Gray's disappearance and his father Randy Gray's search for his son. In April 2017, a young touring cyclist named Jacob Gray stepped off his bike and disappeared in the northern district of Olympic National Park in northwestern Washington. Jacob's disappearance echoed other cases that Billman has researched. Tied into the story of Jacob's disappearance and the subsequent search are the stories of other people who have disappeared in the wilderness, many of which have never been found.

The stories Billman shares about missing people are fascinating and frightening. The described incidences of people who vanished without a trace or an explanation along with the number of cases are both surprising and distressing. The searches have been fruitless and perplexed both authorities and volunteers. The red tape is daunting. It is heartbreaking for the families who have no closure. In between the search for Jacob are the other cases. As you follow the search for Jacob, especially by his father Randy, you will also learn what happens when a person goes missing through his story. Billman becomes friends with Randy Gray and assists in the search for Jacob, which lends the narrative even more gravity.

He also introduces us to several of the eccentric people who search for these people who seemingly disappear without a trace.These include "eccentric bloodhound-handler Duff and R.C., his flagship purebred, who began trailing with the family dog after his brother vanished in the San Gabriel Mountains. And there's Michael Neiger North America's foremost backcountry Search & Rescue expert and self-described "bushman" obsessed with missing persons. And top researcher of persons missing on public wildlands Ex-San Jose, California detective David Paulides who is also one of the world's foremost Bigfoot researchers."

The Cold Vanish is a riveting, well-written account of those missing and the searches around them. It is totally engrossing and held my attention from beginning to end. Billman cites that more than 600,000 individuals go missing in the wild lands of North America each year. Many are found, but those who are not found right away face some steep odds not in their favor of being found.

Disclosure: My review copy was courtesy of Grand Central Publishing.
Posted by Lori L at 2:26 PM