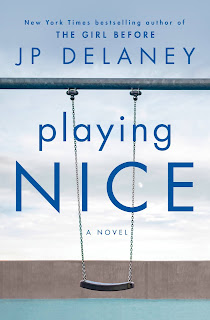 
Playing Nice by JP Delaney is a very highly recommended family drama that turns into a tense psychological thriller.

Pete Riley is a stay at home dad and free-lance writer while his partner Maddie Wilson works at an advertising agency. After Pete returns home from dropping their two-year-old son, Theo, off at preschool two strangers arrive at his door. One of the men is Miles Lambert who informs Pete that Theo isn't his son, he's the Lambert's son, and the Miles and Lucy Lambert's son, David, is actually Pete and Maddie's son. The boys were switched at birth by an understaffed hospital. The Lambert's are suing the hospital but would also like to get to know Theo and have Pete and Maddie meet David. They also encourage Pete and Maddie to also sue the hospital.  For right now, the two families propose an amicable solution where they spend time with both children, but soon it becomes clear that Miles has other plans.

Chapters alternate between the point-of-view of Pete and Maddie in this well-written drama. In between the chapters are excerpts of various documents that are clearly part of some legal proceeding, so you know something is going to go wrong and that Miles will file a suit for custody. It also becomes clear early on that Miles has some serious issues. (You might be tempted to yell "Come on - get a clue and your own lawyer asap!" to Pete and Maddie.) Most people in this well-worn plot get a lawyer right away. Delaney does take the switched at birth plot to a new level, so what begins as a family drama quickly turns dark to a psychological thriller.

Characters are all well-developed and very different from each other. Secrets abound, and some of them are darker than others. The plot seems set, but then takes a turn, and another turn, and another. At the end is a twist that will surprise most readers. The obvious debate embedded in the plot is nature vs. nurture in raising children. There are also several instances where innocent mistakes or missteps can be twisted to make someone look bad or as if they had nefarious intentions. 4.5 rounded up